Fintan O’Toole: The Mexico wall is Trump’s opium for a drug-saturated people

The biggest drug problem in the US is not heroin or crystal meth, but painkillers 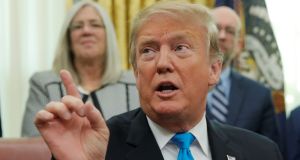 Donald Trump: in a sense his wall is just another drug. For his fans, it is a fix of xenophobia that dulls the pain of the real epidemic that is blighting their lives and their own communities. Photograph: Jim Young/Reuters

After marijuana, the most commonly used illicit drug in the United States is not heroin or cocaine or crystal meth. It is painkillers manufactured by respectable corporations and initially prescribed by doctors.

These are mostly opioids such as hydrocodone (marketed as Vicodin) or oxycodone (OxyContin or Percocet). Approximately 91.8 million adults in the US have used such prescription pain relievers in the past year – a staggering 37.8 percent of the entire adult population. Of these, 11.5 million adults abused prescription pain relievers at least once in the past year – 4.7 percent of all adults.

1 Coronavirus: Non-essential travel from US set to be banned within days
2 Are we really facing the death of the office?
3 ‘Our hearts are broken’ – implications of fresh lockdown sink in
4 Portlaoise locked down: ‘Our older clientele haven’t been back’
5 Google to roll out software fix to remedy issue with Covid app
6 Ten upgrades that will add value to your home and five that probably won’t
7 New call centre at Dublin Airport to track arriving passengers
8 Covid-19 globally: Victoria, Australia, reports most deadly day
9 Gardaí cannot prosecute people who breach midlands movement restrictions
10 Dear Roe, dear Trish, dear John: Your thorniest sex, relationship and parenting problems
11 Covid-19: Germany faces its greatest health experiment as millions return to schools
12 Coronavirus: No additional deaths in State but 68 new cases
13 Meath creche awaits test results after two cases of Covid-19
14 Financial support for Kildare, Laois and Offaly should be considered, says Minister
15 Subscribers cry foul over GAA live match service
16 Irish in Australia: ‘We are in for a few hard years’
17 German nudist chases wild boar that stole laptop at Berlin lake
18 Murky world of international shipping behind explosion in Beirut
19 Caroline O’Donoghue: ‘There is a real anger in Irish millennials’
20 Ecuador navy tracks huge Chinese fishing fleet near Galapagos
21 Gardaí investigate after man’s body found in Dublin house
22 Belarus police crack down as protests erupt after Lukashenko claims victory
23 TV Guide: 30 of the best shows to watch this week
24 All eyes on Tenet, the spy movie with everything to prove
25 Harry McGee: We are seeing the return of Straight-Talking Leo
26 Three midlands meat plants with Covid-19 clusters defer reopening
27 Midlands lockdown Q&A: Firstly, is it a lockdown or not?
28 At least 26 police officers injured in west Belfast violence
29 'There is no way I would go' - Irishman in Malta cancels trip home as two weddings put off
30 Pollan is unique to Ireland so why don’t we eat more of it?
31 Pat Hume: The woman who never gave up
32 Solskjær praises Martial for building himself into ‘powerhouse’ centre forward
33 Bar soap vs liquid: Which is better for the environment?
34 Scarlet for ya: Paul Mescal does classic Connell in The Rolling Stones’ new video
35 Ross O’Carroll-Kelly: ‘We could be in DeVille’s among people who get where we’re coming from. Literally the Vico Road’
36 Covid-19: NPHET calls for fortnightly testing in direct provision
37 Inside the dog-trafficking trade: ‘After drugs, it’s guns, then pups’
38 Angling Notes: Mutilated skate baffles experienced anglers
39 Asylum seekers without Leaving Cert now eligible for third-level grant
40 Battle of Cable Street: when the Irish helped beat back the fascists
Real news has value SUBSCRIBE