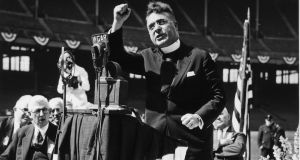 Donald Trump is often said to be unprecedented in American history, and in some respects he is. But not entirely.

There is one other demagogue in the age of mass democracy and mass media who paved the way for Trump. Though he never got all the way to the White House, he was for a period an immensely influential political figure. His contemporary, the American novelist Wallace Stenger, described him in terms that apply equally to Trump: “a shifty manipulator of the truth and a man ambitious for personal power”.

1 Covid-19: Hairdressers, gyms and religious services could return next week
2 Bloomberg ranks New Zealand top in fight against Covid-19 - but how did Ireland fare?
3 How to gift your child a house deposit . . . tax free
4 Q&A: When will we know more about plans to exit Level 5?
5 Alison Curtis: My guilt at not going for a second pregnancy
6 The beginning of the end: 10 things to know about Covid-19 vaccines
7 BOI customers to be charged twice with bank fees on New Year’s Eve
8 Gerry Thornley: Ireland don’t want to box themselves into a corner
9 400 – yes, 400! – Irish retailers for all your online Christmas shopping
10 Man jailed and fined for not giving evidence in Aaron Brady murder trial
11 Fintan O’Toole: Our Government should be a fox. It is actually a snake
12 Donald Trump directs team to co-operate on Biden transition
13 Concern over high number of care staff failing to show for Covid-19 tests
14 Brexit: Rush for last-minute deal to let sausages into North
15 Covid-19 vaccine: ‘I’ll be first in line,’ says Luke O’Neill
16 Appeal court orders drink driver to pay €20,000 fine by New Year’s Eve
17 Vitamin D supplement advised for older people
18 ‘Shock and dismay’ as barristers asked to repay Government Covid grants
19 Hospital and HSE apologise over young woman’s death from brain bleed
20 No further players to be called up to Ireland squad to face Georgia
21 Exiting Level 5: Ministers to push for reopening of shops, restaurants and churches next week
22 Patrick Freyne on Christmas ads: ‘No one belongs on the naughty list.’ This should be big news
23 Donna Hay’s quick and simple one-pan stand-by dinner
24 Value of gardaí examining RTÉ retirement party queried in Seanad
25 Son putting elderly dad under pressure to sign over land
26 Cabinet approves €108m for restoration of midlands bogs
27 Ten of the best Christmas songs (that aren’t by Mariah Carey)
28 Owen Doyle: Ireland suffered from officiating of the breakdown
29 Covid jab: Ryanair will not ask for proof of vaccination within EU
30 Judge rules against €500m Clonshaugh wastewater plant
31 Boeing seeks dismissal of Norwegian Air’s €1bn lawsuit over Max aircraft
32 Thomas Galligan and Cavan raring to meet Dublin in Croke Park
33 Decades of work and a bit of luck drove Oxford vaccine success
34 Covid-19: Eleven deaths reported in North as case numbers fall sharply
35 Ryanair warns it may reduce more services and relocate operations
36 Irish designer of Oxford vaccine: ‘I’ve never worked so hard in my life’
37 Workers have little idea of the cost of retirement income
38 Digital bank N26 targets one million customers in the Republic
39 Kevin McStay: Maybe a knockout All-Ireland Championship is the long-term solution?
40 The Irish ice-cream maker who was diagnosed with diabetes
Real news has value SUBSCRIBE