Fintan O’Toole: Brexit ultras haven’t the guts to do the only logical thing 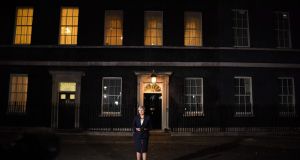 Theresa May gives a statement at Downing Street. It is easier to keep pretending that, if only May had stuck it to the Europeans in the negotiations, the perfect have-cake/eat-cake Brexit would have been delivered. Photograph: Ben Stansall/AFP/Getty

In Ambrose Bierce’s The Devil’s Dictionary, published in 1911, we find the following definition: “Road, n. A strip of land along which one may pass from where it is too tiresome to be to where it is futile to go.”

A pithy summary of the draft UK withdrawal deal from the EU, which was finally published this week, might be: “Brexit, n. A meandering road from where the British found it too tiresome for them to be to where it is futile for them to go.” The deal spells out what Brexit actually looks like: second-class membership of the European Union.

1 Late Late Toy Show: Music, tears, Tubridy’s F-bomb and €5m for charity. What a night!
2 'It just doesn’t feel safe': The restaurants that will not reopen in 2020
3 Ireland in precarious position as third Covid-19 wave could be more deadly, Nphet warns
4 Basic income for all: Has the Covid crisis given us a new economic model?
5 Covid crisis: Republic moves back to Level 3 as shops open from Tuesday
6 Viggo Mortensen: It ‘felt awkward’ replacing Stuart Townsend in Lord of the Rings
7 Ex-barrister Patrick Russell conned people out of more than €12m, gardaí say
8 Best books for Christmas 2020: Fiction, biography, sport and kids’ books
9 Fintan O’Toole: We must first understand anti-vaccine fears, to counter them
10 Hotels, retail, hairdressers, churches, gyms to open next Tuesday, followed by restaurants and gastropubs on Friday
11 David McWilliams: How to reinvent our empty city car parks
12 Ireland’s teenage pariahs: ‘We are really at breaking point now’
13 Exiting Level 5: What will reopen and when will it happen?
14 Miriam Lord: Cartoonist draws a line over five years of politics
15 Miriam Lord: Helen McEntee holds up well for someone with barely a leg to stand on
16 Brexit talks: UK seeks to strip fishermen of 80% of fish caught in EU waters
17 ‘I don’t need to do any of this. . .I don’t actually need to work.’
18 Court blocks Trump legal case over Pennsylvania vote
19 The kitchen smells of rum. Either my old dear is over or Sorcha’s baking a Christmas cake
20 Ryanair customers may face charges of up to €100 to cash refund cheques
21 US court rejects Trump’s attempt to block Biden win in Pennsylvania
22 Direct sea routes to Europe offer certainty in choppy Brexit waters
23 Ireland’s work-ons: Four things Andy Farrell needs to address
24 Admission of mistake in Oxford vaccine dose raises doubts over reliability
25 State settles on Covid strategy after pivotal meeting
26 Austria bids farewell to Fucking after a millennium of misunderstandings
27 I yearn like a hungry dog for a camouflage Dryrobe
28 Businesses can show ‘Dunkirk spirit’ by taking new direct ferry to France
29 Will Europe shut down its ski resorts this winter?
30 Problem of maintenance persists 25 years after divorce introduced
31 Shot, bayoneted and clubbed: the ruthless lengths the IRA went to at Kilmichael
32 More than €5.2 million raised during RTÉ Late Late Toy Show
33 Miriam O’Callaghan’s ‘forever sorry’ apology puts her usual touchy-feeliness in the shade
34 David Humphreys: Georgia simply can't be dropped in at the deep end
35 Ireland’s clash against Georgia will be an important audition
36 Department of Housing ‘crossed the line’ in criticising asylum seeker plans, O’Brien says
37 Older men’s fixation with younger women really boils my kidneys
38 Chinese vase valued €800 sells for €1.2m at Irish auction
39 Sordid murder of hurling brothers still resonates in south Galway
40 Breda O’Brien: Data collection on abortion is a travesty
Real news has value SUBSCRIBE