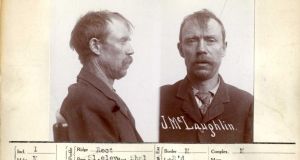 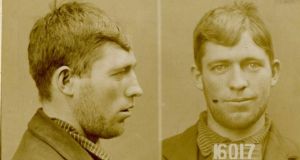 Patrick J Murphy (24) , a labourer, arrested in San Francisco on December 17th, 1902, for robbery, but apparently only held until December 23rd. 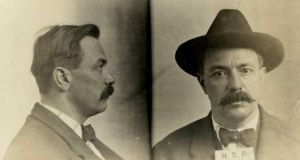 EC Reiley (41) a cook, resident of Columbus, Ohio was arrested in Carson City, Nevada for forgery on October 24th, 1911 and sentenced to 2 years and 6 months. 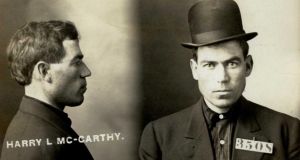 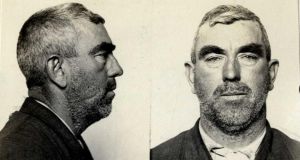 Early 20th-century American US police records for 10 Irish emigrants have come to light after 100 years. The criminal investigation cards were created during the years 1902-1912, in various US cities, and contain mug shots, crime details and personal details about the men.

The cards, made by police forces in the states of California, Nevada and Washington, have turned up among a selection of historical memorabilia to be sold at auction in Dublin on July 1st by Fonsie Mealy Auctioneers .

The cards record that the place of “nativity” of all 10 men was Ireland and offer a fascinating insight into their lives.

Their crimes were relatively minor – mainly theft – and the longest sentence was 2½ years for EC Reiley, a cook charged with forgery in Nevada.

Many of the policemen who handled the cases were themselves Irish.

Information about the men’s weight, height, hair colour and distinctive “marks, scars and moles” proves that the 21st century fashion for tattooing was very common among Irishmen a century ago. Examples recorded on the cards includes the men’s own initials, anchors and the Claddagh ring symbol of hands clasped across a heart.

Many of the men had scars and evidence of broken bones. Police noted that John Douglas (33), a cook arrested for “vagrancy” in Seattle in October 1913, had a wrist which was “stiff and crooks in”.

One man’s body hair caught the eye of police: Charles Barker (35), an elevator operator in San Francisco arrested for burglary in the city in 1908 by a Det Sullivan, was described as having “hairy breast & arms” and was sent to the California State Prison at San Quentin for two years.

His place of residence was listed as 208 Shipley Street – an area of the city known as “South of Market”.

The set of cards in the auction, expected to sell for up to €350, were created by police forces in three US states but, presumably, such cards exist for all the states. The cards could prove to be a useful, and hitherto apparently untapped, major new resource for professional and amateur genealogists in the US and Ireland researching a family tree or trying to trace a long-lost emigrant relative.