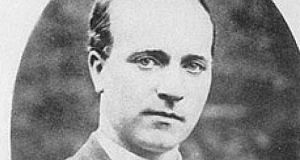 Tomás MacCurtain, who was later murdered by members of the RIC in 1920, was the Brigade Commander of the Irish Volunteers in Cork city and county in 1916.

The family of murdered lord mayor of Cork Tomás MacCurtain have expressed disappointment at the cancellation of events to mark the centenary of his death but say it entirely understandable given the threat posed by Covid-19.

MacCurtain’s granddaughter, Fionnuala, said the family fully accepted the decision by Cork City Council and various community groups to cancel events scheduled for this weekend to mark the centenary of his death.

MacCurtain, the first republican lord mayor of Cork and a commandant in the IRA, was shot dead in front his wife and family by a party of RIC men when they burst into his home on Thomas Davis Street in Blackpool on March 20th1920.

An inquest conducted by coroner James J McCabe, which heard evidence from 97 witnesses, later returned an unanimous verdict of “wilful murder” against then British prime minister Lloyd George and a group of named RIC officers.

Among the events scheduled to mark the centenary of MacCurtain’s murder was a play re-enacting the inquest performed by UCC Players drama group and directed by Dr Finola Doyle-O’Neill of the School of History at UCC.

The play was due to be performed in UCC on Thursday with President Michael D Higgins and his wife Sabina due to attend. A second performance was due to take place at MacCurtain’s alma mater, the North Mon on Friday.

However both events have had to be cancelled due to the Covid-19 crisis along with a concert in Cork City Hall on Friday and several events in Mourneabbey in north Cork where MacCurtain was born on March 20th 1884.

Instead, the council is holding a private ceremony on Friday when Fionnuala MacCurtain and Lord Mayor of Cork Cllr John Sheehan will lay a wreath at MacCurtain’s grave at the Republican Plot at St Finbarr’s Cemetery.

“It’s bitterly disappointing, not just for us as a family, but also for all the community groups and school groups who had put in so much work and effort that all these events have had to be cancelled because of the Coronavirus.

“The children at Burnfort School in Mourneabbey where my grandfather went to national school had done projects which I was due to review after they unveiled a monument to him outside the school on Friday,” she said.

“All these events have had to be cancelled but hopefully they will just be deferred and not forgotten but it’s entirely understandable because we find ourselves in a very serious situation where the health of so many is at risk.

“So it’s disappointing that the events are not going ahead but it’s a time and an opportunity to remember my grandfather’s spirit rather than going out to commemorate his life which we can hopefully do at some later stage.

“We’re in a different type of war to the one that he faced but just as Cork was burnt down 100 years ago but got back on its feet so too will we get back on our feet from this virus which is threatening us all.”