‘Christmas doesn’t start in Cork until the Holly Bough arrives’ 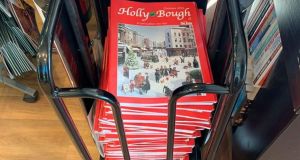 ‘I was trying to explain the Holly Bough to people who are not from Cork . . . it is like being asked to go on the Late Late Show.” Photograph: Holly Bough/Facebook

Crime author Catherine Ryan Howard saw her thriller Rewind hit the best seller lists this year and she was nominated for a prestigious Edgar award by the Mystery Writers of America.

However, an invitation to pen a short story in the Holly Bough magazine was the real proof of her “arrival” according to her family in Cork.

“I was trying to explain the Holly Bough to people who are not from Cork. (At home) it is like being asked to go on the Late Late Show. My mother Kathleen was thrilled. I got the same reaction from friends when I put it on Facebook, ” she says.

“Christmas doesn’t start in Cork until the Holly Bough arrives.”

The Cork institution that is the Holly Bough magazine was first published in 1897. Other than during war or a paper shortage it has been a constant on the streets of Cork every Christmas.

“My grandfather William (Billy) Ryan was written about in the Holly Bough in 2013. He was a CIE driver who worked for a very long time in the lost property office. He was known around the city,” says Ryan Howard.

“My parents’ generation love being in the Holly Bough.

“This year I was nominated for an award in New York and I had a bestseller and none of that mattered. I knew that the thing that was going to be remembered was that I was in the Holly Bough. It is such a part of Cork life.”

The magazine, which is edited by The Echo features editor John Dolan, sells in the region of 57,000 copies every festive period, bucking industry trends by increasing in size and sales annually.

Dolan, who first started editing the Holly Bough in 2002 after moving to Cork from England a year earlier, says the magazine is “remarkable” from a circulation point of view.

“At the turn of the Millennium the Holly Bough was selling about 21,000 and we now sell about 57,000. This is the great joy of it. It is going up and up. There is a digital edition which people can buy, but hardly anyone buys that. They want the Holly Bough in their hands.”

Dolan said when he took over the editing of the Holly Bough there was a degree of confusion about when its first edition went to print.

“I got quite lucky because in one of the first years I was editor a guy from Canada who was originally from Cork got in touch with me to stay that in his loft he had found the very first Holly Bough. It was dated 1897.

“He sent me some photocopies of it and you can see very clearly that this was the very first issue of the Holly Bough. It had a mission statement which I published in recent years.

“It was published by the Cork Constitution newspaper at the time.”

Dolan starts “tipping away” on the editing of the magazine from Easter with the real frenzy beginning in October.

“People take it on holiday. People take it on their Camino trips in Spain. It has been in Africa and Antarctica. Obviously, all the great sites: the Leaning Tower of Pisa; the Great Wall of China, ” says Dolan.

“I bumped in to someone in the street who said ‘My picture is in the Holly Bough. I will have to buy five copies.’

“It is a great circulation drive but that wasn’t the intention of it! The intention was to emphasise the community side of it.

“There is so much emigration going back generations and so much pride in people from Cork. Even if they are not born here and it is the parents they have this pull back to Cork.”

Dolan says he takes pride in the widely-held sentiment of the Holly Bough being “a good read.”

“One woman told me she only finished reading it last Easter and I was delighted with that.”

Historian and author Gerry White has written for the Holly Bough for 30 years.

“It is a Cork institution,” he says. “During that time Cork has witnessed many changes but the Holly Bough has never failed to bring Christmas cheer to its readers here in Cork and indeed to the Irish diaspora throughout the world.

“The best way I could describe it would be an unfinished history of Cork written by the people of Cork with a new chapter that is added every year.

“The Holly Bough articles involve stories about the great array of Cork characters. It makes sure that these picturesque and colourful people who made Cork the city that it is will never be forgotten.”

Why did reporter Christine Chubbuck shoot herself live on air?
6

Ireland and the Nazis: a troubled history
8