From the archive: If you’re taking the plunge over the festive season, remember the feminists who did so before you 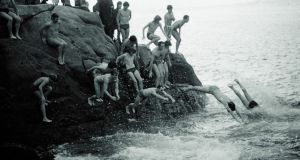 For years, Christmas morning on Dublin’s southside coastline has been interrupted by giddy siblings and bustling parents readying to take on the traditional Christmas Day swim at Sandycove’s Forty Foot swimming area, and other bathing spots dotted along the Dart line. The Christmas Day swim at the Forty Foot often feels like a spontaneous gathering, even though the activity is a longstanding Dublin tradition. Dubliners have been swimming at the site for around 250 years.

Pictured here is a brisk festive swim in 1971. It’s worth noting that in this photograph, there appears to be at least one woman in the water, wearing a swimming cap. Less than three years later, in 1974, women protestors calling themselves the Dublin City Women’s Invasionary Force plunged into the water of what was, up until then, traditionally a men’s public bathing place, where some men also bathed nude before 9am. Women returned to protest in 1989, when more than 1,000 people turned up to witness fewer than five women protesting by bathing nude. If you’re taking the plunge there over the festive season, remember the feminists who did so before you.

The popularity of sea swimming has exploded in recent years, as wellness, Instagram, and the need to alleviate anxiety with a cold-water body high have collided. Unfortunately, this popularity has also coincided with a year of desperate pollution in Dublin Bay in 2019 due to inefficiencies with sewage and water treatment. Swimming bans were a blight this summer, curtailing activities. It’s truly unacceptable that such a beautiful attribute of a European capital city is so blighted with disgusting images of waste flowing into Dublin Bay.

In 2020, many will be making a New Year’s resolution to get in the sea more. But it is beholden on the powers that be to ensure this swimming, which is free, and brings neighbours, communities, friends and families together, is of a standard that is not harmful or illness-inducing. Let’s make 2020 the year of foresight, not hindsight for the quality of our seawater, as wet skin dries on Dublin rocks, hot drinks are sipped on the shoreline, towels are wrapped around shivering children, hair is frizzed, selfies are taken, seals are spotted, buoys are marked as ambitions, and another Christmas passes, salty, fresh, and local.

Patrick Freyne: The mystery of Dermot Bannon and his many surrogate wives
9 Welcome to the child sex capital of Europe
10