Guillaume Apollinaire, France’s most acclaimed war poet, who was born in Rome to a Polish noblewoman, survived the trenches of the first World War only to be killed by Spanish flu at the age of 38 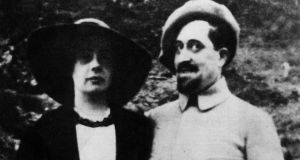 Angelica hailed from Lithuanian-Polish petty aristocracy. Her grandfather had been wounded while fighting with the czar’s troops at Sebastopol. Her father was a valet to the pope. Angelica was a demimondaine, kept by wealthy lovers.

Family legend claimed that Guillaume’s father was a Roman aristocrat. But in the first decade of the 20th century, when Apollinaire was a writer and art critic at the heart of the pre-war cultural revolution in Paris, his friends believed him to be the illegitimate son of a Roman prelate.

“He was registered as the son of an unknown father and remained so,” says Laurence Campa, the author of the definitive biography of Apollinaire, published by Gallimard in Paris.

Angelica took Guillaume and his half- brother Albert to the Côte d’Azur, where she haunted the gambling dens of Nice and Monaco. Apollinaire alluded to his school days there in Alcools, his best-known collection of poetry, published in 1913.

Officially, Apollinaire was a citizen of Russia. But his virtual statelessness, combined with the legend of his heroic great-grandfather, prompted him to join up as soon as the first World War began. “What would happen to me if I were expelled from France?” he wrote to a friend in 1911. “These doubts destroy the peace of mind I need to work.”

A law passed on August 5th, 1914, three days after France was invaded by Germany, speeded up the naturalisation of foreigners who joined the army. On his military registration form, Apollinaire noted that he spoke German and was “a good enough walker [who] knows the Belgian and Prussian forest and the Rhineland region between Koln and Koblenz for having crossed them on foot”.

Apollinaire’s naturalisation applications had been rejected. A 1913 law foresaw the expulsion of foreigners in the event of war. The army rejected him as well, because of his Polish surname. Through the intervention of a prominent Paris publisher, Apollinaire was allowed to travel to Nice, where on December 29th 1914, he was overjoyed to be admitted to the 38th artillery regiment. He would wear a French army uniform for the rest of his life.

Before the war, Apollinaire was also rejected by Annie Playden, an Englishwoman he met when both were teachers for the children of a rich German noblewoman. Apollinaire’s close friend Pablo Picasso introduced him to the painter Marie Laurencin, who left him before the war.

While in military training, Apollinaire met Louise de Châtillon-Coligny, for whom he wrote many of his best war poems:

As his biographer Campa points out, Apollinaire had not yet seen any shells exploding. He would continue to use childlike imagery, and to preserve an inner world of beauty, even in the trenches. But Apollinaire’s experience of war also changed his poetry. In Bleuet (the equivalent of the poppy in Britain), Apollinaire described the psychological ravages of battle:

Young man
of the age of twenty
who has seen such terrible things . . .
You have looked death in the face more
than a hundred times and you don’t
know what life is

Bleuet is a “calligramme,” a form of poetry invented by Apollinaire just before the war, in which words are written or typed to form drawings. He was thrilled to find that army artillery manuals used word drawings, such as instructions written in the form of an arrow. Calligrammes is the title of the main collection of Apollinaire’s war poetry.

Apollinaire realised quickly that his “beloved Lou” was playing with him. He continued to write to her, but also began a correspondence with Madeleine Pagès, a literature teacher whom he met on a train in January 1915.

Letters to Madeleine combine the three strains of Apollinaire’s poetry: sex, love and war. His eroticism is often humorous and ironic, as when he writes of midwives fantasising about priapic cannons. Some of it is so explicit that one is amazed it passed the military censors: “My tense flesh, hardened by desire will penetrate your flesh,” he wrote to Madeleine on October 22nd, 1915.

Apollinaire’s letters are equally explicit about the war. In July 1915 he wrote of “the horrible horror of millions of big, blue flies,” of “holes so filthy you want to vomit.” Four months later, it was “mud, what mud, you cannot imagine the mud you have to have seen it here, sometimes the consistency of putty, sometimes liked whipped cream or even wax and extraordinarily slippery.”

In December, Apollinaire told Madeleine that “the heart jumps with every thunder” of the Germans’ 105mm artillery. “It jumps not from fear or emotion – those things no longer exist after 15 months of war – but it jumps because the change in air pressure shakes everything.”

In November 1915, Apollinaire was transferred at his request to the 96th Infantry Regiment and was promoted to 2nd lieutenant. It was a matter of “virile pride,” writes Campa. Living conditions were better for officers, and “something in him wanted to go to the limit of his commitment. He believed that being a poet meant taking risks.”

Apollinaire was wounded by shrapnel in the right temple in Picardy on March 17th, 1916 – eight days after becoming a French citizen. He suffered fainting spells and partial paralysis on the left side of his body. Doctors drilled a hole in his skull to relieve the pressure two months later.

While in hospital, Apollinaire gave an interview to a cultural magazine in which, with his usual prescience, he predicted that cinema would soon become the most popular form of art.

Picasso portrayed the convalescent soldier with his head in bandages and the medal of the Legion of Honour pinned to his chest. Apollinaire never fully recovered. His epistolary engagement to Madeleine had faded after he visited her on Christmas leave in 1915.

In his last letter to her, in September 1916, he wrote: “Almost all my friends from the war are dead. I don’t dare write to the colonel to ask him the details. I heard he himself was wounded.”

Apollinaire remained in Paris, still in uniform, as a military censor. He was afraid of being sent back to the front, and the job allowed him to frequent publishing circles. Campa, who studied his work in French archives, says he was a lenient censor.

In May 1918, Apollinaire married Jacqueline Kolb, “the pretty redhead” for whom he wrote the last poem in Calligrammes. Kolb’s lover had been killed on the same battlefield where Apollinaire was wounded. Picasso and the art dealer Ambroise Vollard were witnesses to the marriage.

Six months later, on November 9th, Apollinaire was killed by the Spanish flu epidemic that claimed more lives than the entire war itself. He was 38 years old, and the French language was deprived of untold riches.

Apollinaire died on the day Kaiser Wilhelm abdicated. Legend has it that from his top floor apartment at 202 Boulevard St Germain he heard people shouting “À bas Guillaume!” In his delirium, the poet believed they referred to him.

It took decades for Apollinaire to attain his rightful place as France’s favourite war poet, largely because the surrealists maligned him for allegedly having glorified war, and for working as a censor.

“Ah God! But war is pretty,” Apollinaire began the poem The Rider’s Adieu. Another poem, Marvel of War, describes rockets lighting up the sky at night, “climbing to their summit and leaning over to look”.

But the rider in the “pretty war” dies. Apollinaire used the word “marvel” in the medieval sense of things supernatural or surprising. The same poem goes on to talk about cannibalism and human bodies roasting.

The French public came to Apollinaire’s poetry indirectly, via Alcools, which is, along with Jacques Prévert’s Paroles, the country’s best-loved collection of 20th century poetry.

Next year Apollinaire and other poets will be commemorated at the Historial de la Grande Guerre (Museum of the Great War) at Péronne in the Somme. Another exhibition, at the Musée de l’Orangerie in Paris, will explore Apollinaire’s friendships with painters.

“Through his innovation and inventiveness, Apollinaire initiated 20th-century poetry,” says Campa. “By embracing cubism and abstraction, he also opened the artistic century . . . Now he’s become a symbol of the more than 500 French writers who perished in the first World War, whose names are engraved on the walls of the Pantheon. He also symbolises the many foreigners who sacrificed their lives for France.”