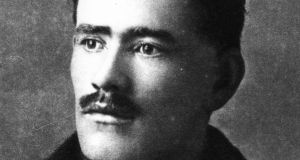 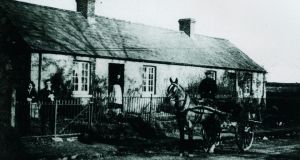 Janeville, the Boyne Valley cottage where Francis Ledwidge was born

I first heard the name of the Meath poet Francis Ledwidge in a Dublin classroom in 1966 – central to that year’s schoolday preoccupations was learning by heart the poems of the 1916 poets, Pearse, Plunkett, McDonagh and of course Yeats towering over all.

Ledwidge was introduced into our immersion in the poets of the rebellion through his elegy in memory of McDonagh, with its memorable opening line: “He shall not hear the bittern cry”.

The national amnesia towards the Great War was both pervasive and perverse, so I don’t recall being given any account of his role – or indeed that of thousands of his fellow countrymen – in that war, or that he was our poet of a war that had taken the lives of several soldier poets.

Here in Ireland, in that year of commemoration almost 50 years ago, those Irishmen who served in the war found themselves consigned to a place in history where “honour turns away in shame”: a line censoriously removed from Ledwidge’s poem Soliloquy in its earliest published versions.

When a stray shell killed Ledwidge at the age of 29 at the third Battle of Ypres on July 31st, 1917, (known too as the Battle of Passchendaele), it also left a literary quandary. Had he lived would he have evolved beyond the “peasant poet” image assigned to him and into the better, more accomplished poet that some of his later poems suggested.

Might the transition from the Boyne to the Balkans, from a poet of the fields and streams of Meath to a poet of the No Man’s Land of Flanders, have become a defining event to reshape his outlook as a poet.

Ledwidge’s impoverished background – including a curtailed formal education – might well have been a barrier to the literary life but for the intervention of Lord Dunsany, who became his patron.

The poet was acutely aware of his social position: “And I thought how they will ignore me Because of my humble line, That I guided the plough before me Or bored in the deep wet mine.”

To some among his contemporaries he might – and reasonably so – have seemed a tangle of contradictions: farm labourer and road worker whose literary mentor was the ascendancy-class Dunsany, a copper miner whose trade union activism got him into trouble, supporter of the Gaelic League, a nationalist and founder of the local branch of the Irish Volunteers who put on a Tommy’s uniform.

At home, on leave in the aftermath of the 1916 Rebellion, he expressed public anger at the treatment of the leaders (he had befriended McDonagh) but remained loyal to his commitment to serve in the war. An insubordinate response to a senior officer who had made an offensive comment on the Rising cost him a court martial and loss of his lance-corporal rank.

His decision to enlist in October 1914 in the 10th (Irish) Division of the Inniskilling Fusiliers must have baffled many of his Co Meath friends and his new literary acquaintances, including Oliver St Gogarty and Pádraic Colum. At a meeting of Navan Rural Council earlier the same month, he had refused to support a motion congratulating Redmond on his call to Irishmen to join the fight. His opposition to Redmond’s call to the Volunteers to enlist in the British army seemed resolute.

Some wrongly attributed his change of heart to the influence of Dunsany (who was himself a captain in the Inniskillings), others to the rejection he received from a local girl in Slane, Ellie Vaughey: “I’m wild for wandering to the far-off places / Since one forsook me whom I held most dear.”

But it wasn’t as simple as unrequited love. The real motive is closer to principle and conviction and Ledwidge’s own declaration that it was because Britain “stood between Ireland and an enemy common to our civilisation and I would not have her say she defended us while we did nothing at home but pass resolutions”.

It was a sentiment he repeated in the more mystical language of his poem The Irish in Gallipoli: “. . . we but war when war / Serves Liberty and Justice, Love and Peace”.

His apprentice nature poems can be ridiculed for the sweetness of pastoral cliché and what Seamus Heaney called a melodiousness “that can at times verge on the infantile”.

Pointing to how lucky he was in his birthplace, Páraic Colum wrote that “the unique knowledge which Mr Ledwidge possesses is of the fields of Meath, and this knowledge makes him one of the company of old Irish poets who sang of the deer on the hillside, the badger coming out of his hole, the crane flying over a lake, the blackbird singing in a bush”. The “poet of the blackbird” label was one to which he became shackled, even in death.

James Stephens, too, was hopeful for his young talent. “He is only a beginner and must digest his ancestors before we know what he really is like . . . his promise is, I think, greater than that of any young poet now writing.”

However, his poetic innocence and simplicity was knocked out of him on the battlefield where his experience led to more striking poems with a harder edge that his early poems lacked.

His later work suggested a new direction and evolving mastery of the more finely-judged use of language evident in his lament for McDonagh and other poems such as To One Dead, Soliloquy and A Soldier’s Grave. It was to be short-lived: another poem from that promising period, To One Who Comes Now and Then”, was dated July 22nd 1917, only nine days before his death.

The imagery in many of his final poems, written between his arrival in France in December 1916 and his death, is not drawn from the horrors of the war around him, but from the sustaining memory of home and his kinship with nature; yet he was fully aware of “the mad alarms / Of battle, dying moans and painful breath” and that “The Present is a dream I see / Of horror and loud sufferings.”

In his letters to Katherine Tynan and others he does not shy away from graphic descriptions of the terrible conditions and daily futilities; in a few poems the war does intrude on the dreamy reveries of the homesick soldier: “And one said: ‘ A loud tramp of men We’ll hear again at Rosnaree.’ A bomb burst near me where I lay. I woke, ’twas day in Picardy.” (The Dead Kings)

Ledwidge’s war included the catastrophic slaughter and military fiasco at Gallipoli (Rupert Brooke died on his way there ). After Gallipoli, it was on to Salonika and the hellhole of wintry Serbia, the place where he experienced what his biographer Alice Curtayne called “the greatest event of his literary life” when an advance copy of his first book, Songs of the Fields, reached him.

Writing to Dunsany, who was back in Ireland as a training officer, he declared: “ My best is not in it. That has to come yet. I feel something great struggling in my soul but it can’t come until I return; if I don’t return it will never come.”

Had he survived the war, that “great struggling in his soul” might have given us a poet of different distinction; his insights matched by new technique. As a war poet he has been eclipsed in the recent anthologies by his English contemporaries – Wilfred Owen, Siegfried Sassoon, Isaac Rosenberg and the finest of them, Edward Thomas (Ledwidge survived the battle of Arras in which Thomas was killed).

Curtayne in her biography takes the view that he “contributed nothing to war poetry as such”, that even in the midst of the destructive forces of war, his “allegiance was to nature”. On the other hand, Heaney places him as a war poet in the company of Owen and Sassoon.

Songs of the Fields was greeted by laudatory reviews in Ireland and in Britain. The contrast between the landscape of war that surrounded him and the imagery of the poems in that first collection could not have been greater. The fields around Slane, the river Boyne and local legends were his first inspirations. His Songs were a homage to the beauty of his native Meath – its meadows and rivers, its trees and wildflowers, and above all the blackbird with which he was so closely associated.

One reviewer of his posthumous and better second collection, Songs of Peace, wrote that “ when he died, a poet was not transfigured, but killed, and his poetry was not magnified, but blasted in its first flowering . . . To those who know what poetry is, the untimely death of a man like Ledwidge is nothing but calamity.”

As to whether Ledwidge truly believed that “A keen-edged sword, a soldier’s heart, / Is greater than a poet’s art” (Soliloquy) we can only speculate, but he accurately predicted the posthumous fate (until so very recently) of the thousands of Irishmen who died in that war in two lines from the same poem – “A little grave that has no name / Whence honour turns away in shame.” Further reading: The Ledwidge Treasury: Selected Poems. Introduced by Seamus Heaney, Afterword by Dermot Bolger (New Island); Francis Ledwidge: A Life of the Poet by Alice Curtayne, introduced by Jennifer Johnston (New Island)