Century: Marching to a different tune

In the Great War, many Irish soldiers fought for Britain and Irish musicians wrote many British marching songs – but the Irish perspective was not that of the average Tommy 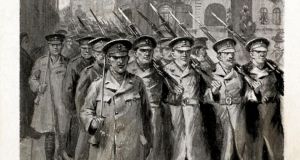 Marching song: It’s A Long Way to Tipperary’s combination of Irish emigrant lament and English music-hall caper made it irresistible to soldiers in the British army, seen marching in Berlin in the contemporary postcard. Photograph: Culture Club/Getty

F or decades the songwriter and multi-instrumentalist Mike Oldfield struggled with the difficult legacy of his grandfather, who died long before he was born.

Oldfield’s mother, Maureen (Liston) Oldfield, struggled with her own deep psychological issues all her life. Her son believed that his mother’s trauma was passed down from her father, Michael Liston. He was in the Royal Munster Fusiliers during the first World War and emerged traumatised from the experience.

Michael Liston was from Charleville, Co Cork. “Having to go from the fields and forests of Co Cork and face that. What a massive, indescribable nightmare it must been,” Oldfield wrote in his autobiography, Changeling.

Liston was a changed man when he came back from the war, and his children suffered too.

Inspired by a visit to Ypres, and having seen the names of so many Munster Fusiliers on the New Menin Gate, Oldfield wrote the song Nuclear for his most recent album, Man on the Rocks.

“One of the most powerful experiences I’ve had in the last 10 years was when I went to Ypres and Passchendaele and saw where many members of his regiment, the Munster Fusiliers, were buried,” Oldfield writes in the sleeve notes. “I’m very tuned to residual atmospheres of places and you can still feel the desolation there. It’s a song about frustration anger, desperation. I wanted a powerful word to put it all into a song, and ‘nuclear’ came to mind.”

Oldfield is another in the long list of singers and songwriters haunted by the collective imagining of a war that continues to fascinate even as it appals and repels.

The Irish tradition of Great War songs started before the conflict with It’s A Long Way to Tipperary and continues to the present day with the band Primordial’s Where Greater Men Have Fallen.

Marching songs were very important to the morale of infantry soldiers. The first World War was the last major war in which soldiers marched to the front and then marched away again. It was a long, long way for men weary with pack and rifle. Boredom and fatigue were leavened by songs which roused the spirits and improved morale.

It’s A Long Way to Tipperary’s combination of traditional Irish emigrant lament and English music-hall caper proved irresistible. The song was written by Jack Judge, the grandson of an Irish emigrant from Ballyhaunis, Co Mayo. According to the legend, it was tossed off in a single night in 1912 as a bet. The song of an Irishman who came to “mighty London” to make his fortune was not written as a war song, but it became one.

It was first adopted by the second battalion of the Connaught Rangers. It became the marching song of the entire British army, but less well known is how it circulated among all the warring parties. Even the Germans picked it up. La Grande Illusion, one of the outstanding first World War films, includes a scene of French prisoners of war singing it in vaudeville. The Germans sang it in Das Boot.

The Irish songs about the first World War that endure the most are the ones that take issue with the slaughter and question why Irishmen are there in the first place.

One of the great songs about the Easter Rising, The Foggy Dew, included a reference to Gallipoli: “’Tis better to die ’neath an Irish sky than at Suvla or Sedd el Bahr.”

Author Canon Charles O’Neill knew his Gallipoli campaign. Sedd el Bahr (now Seddülbahir) is where V Beach is located, the place that saw the Royal Dublin Fusiliers and Royal Munster Fusiliers slaughtered on the first day of the Gallipoli campaign. Suvla Bay is where the 10th (Irish) Division landed in August 1915 and was cut down.

Gallipoli, another song about the campaign from an Irish perspective, was written by Mike Swan and Daire Doyle of The Memories and made famous by The Fureys. It is told from the perspective of a father saying goodbye to his son heading off to Gallipoli: “And it killed your poor ma, and it’s slowly killing me, / You were blown to kingdom come on the shores of Gallipoli.”

Another anti-recruiting song was Salonika about an almost forgotten campaign by the 10th (Irish) Division, who fought in the mountains of Macedonia against Bulgaria. Salonika was retrieved from obscurity by the Cork singer-songwriter Jimmy Crowley. It’s a sardonic offering about the “separation” women who received an allowance while their husbands were away at the front. The song contrasts the “slackers” who stay at home in contrast to the soldiers away at the front. It is clear where the songs’ sympathies ultimately lie: “But when the war is over, / What will the soldiers do? / They’ll be walking around with a leg and a half / And the slackers will have two.”

Another soldier’s lament is John Condon, dedicated to the soldier of the same name from Co Waterford who became the youngest soldier to die in the allied cause. Evidence now disputes that he was 14, but the sentiments of this song, which should be better known, tell a powerful tale of futility: “Now tell me, John / . . . your life untold, 14 years old, / to die a soldier? / and all around, the harp and crown, the crosses in the ground. / What cause was served? / So undeserved!”

The most famous and most loved contemporary Irish song of the first World War is Scottish songwriter Eric Bogle’s The Green Fields of France. It is one of Bogle’s brilliant trilogy of first World War songs, along with And the Band Played Waltzing Matilda (recorded by The Pogues about Gallipoli) and All the Fine Men (recorded by Mary Black).

The Green Fields of France is known as an Irish song, though no mention is made in the lyrics to the soldier’s nationality. Indeed, the only mention of nationality is the reference to the Scottish song The Flowers of the Forest.

The definitive version of this song was recorded by The Fureys and Davey Arthur. It was rereleased this year as part of the Poppy Day appeal in a much-derided version by the singer Joss Stone and the guitarist Jeff Beck.

Who was the Willie McBride in the song? The most likely candidates are buried in the beautiful Authuille Cemetery in the Somme, which is built on the slope of a hill. Here lie two William McBrides, both from the Royal Inniskilling Fusiliers. One died in February 1916, the other in April 1916, curiously before the Somme became synonymous with mass slaughter. Both are from the North.

In an interview with Myles Dungan on Lyric FM earlier this year, Bogle confirmed that he had an Irish soldier in mind when he wrote The Green Fields of France.

Bogle wrote the song in 1975, a year after the Birmingham and Guildford bombings unleashed a wave of anti-Irish sentiment in Britain. It was a “subtle reminder” to British people that thousands of Irishmen had died in the first World War in the service of the British empire. However, Bogle conceded that the reference was so subtle that “most people missed it”.

“The Irish were not flavour of the month in the UK,” he said. “A lot of Irishmen died preserving the British Empire during the first World War.

“The reason they fought and died was rarely to preserve the British Empire. It was a bit of fun, adventure, and a way to make a living. Nonetheless, a lot of them died. It was a wee reminder that they weren’t all Tommy Atkins [the generic name for English soldiers at the time].”

Bogle’s And the Band Played Waltzing Matilda is a brilliant account of the Gallipoli landings. In Australia, it is regarded as the definitive song about their first World War experience and the country’s greatest anti-war song:

I see the old men all tired, stiff and worn,

Those weary old heroes of a forgotten war

And the young people ask, “What are they marching for?”,

And I ask myself the same question.