The Somme: never were so many sacrificed for so little 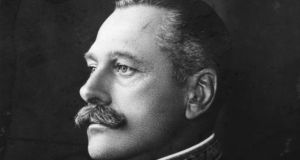 The machine gun is a much over-rated weapon. – Field Marshal Douglas Haig, 1915, British commander-in-chief during the battle of the Somme

The nation must be taught to bear losses. – Haig, before the Somme, 1916

Very successful attack this morning… All went like clockwork… The battle is going very well for us and already the Germans are surrendering freely … – Haig, on day one of the Somme: 19,000 British soldiers die, 2,000 of them members of the Ulster Division, for three square miles of territory. The bloodiest day in the history of the British army.

Pyrrhus, after the battle at Asculum: If we are victorious in one more battle with the Romans, we shall be utterly ruined.

In all, the 141-day battle of the Somme would claim some 1,000,000 casualties, a new kind of battle, in a new kind of war. A battle whose memory would become an intrinsic, vital part of the national stories of so many countries, Ireland included, not only for its sheer scale and its industrial-like slaughter, the mud and machine guns, but also for what its fighting said about the nature of the societies at war.

Never more exposed were ruling classes and their socially remote, myopic, incompetent generals, exemplified by Haig, able and willing blithely to sacrifice so many of their citizens for so little. Not just killed, but in truth, murdered.

The Irish toll in this one battle alone is not easy to calculate, but estimated by journalist Ronan McGreevy, author of a new book on the Irish on the Western Front*, at more than 7,000 dead. More than 15 times the number of all those who died in the Rising, combatants and civilians, two months beforehand.

The proximity of the marking of both these two seminal moments in our history – though the Rising festivities were admittedly both celebration and commemoration – emphasises above all their interconnectedness. For many who rose that Easter the war was the spur, an obscenity that needed to be challenged; for many who fought in France and Salonika in 1916, the cause of Irish freedom, maybe misguidedly, or the defence of the union, were their motivation. Common echoes too in some of their respective leaders’ belief – Pearse and Redmond, particularly – that both were necessary blood sacrifices for their respective causes.

This supplement, the 10th in the Irish Times “Century” series for the decade of commemoration, roots the Somme firmly in our history and experience – not a foreign war fought by foreign armies – an experience still buried in the collective, often still suppressed, memories of most Irish families. But it also roots our history very much in the mainstream of European history. Verdun – the Somme would be fought primarily to relieve pressure on the city – would be to France the defining moment that the Somme was to Ulster, Ireland as a whole and to Britain and its allies.

* Ronan McGreevy: “Wherever the Firing Line Extends - Ireland and the Western Front”