The Somme battlefield: the longest 10 miles in history

The longest and bloodiest seven miles in British Military history, where over 3,500 Irish soldiers died on the first day, took place on July 1st 1916. 100 years later the landscape still bares the scars of the great war. Video Enda O'Dowd/ Reuters 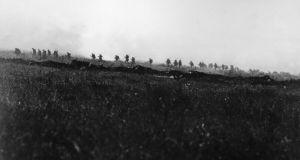 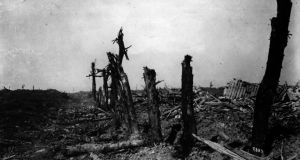 The Somme battlefield is bisected by the old Roman road between Albert and Bapaume. In 1916, Albert, an attractive cathedral town, was behind the British lines, the last vestige of civilisation before the Tommies entered the mouth of hell.

Bapaume was behind German lines, and an objective of the initial July 1st assault. British commander Field Marshal Sir Douglas Haig envisaged that the artillery barrage that preceded the infantry assault would destroy the German front lines and the infantry would walk through. In such circumstances, his beloved cavalry (he was originally a cavalryman) would push through to Bapaume on the first day or some days after that.

The artillery barrage did not work, and the British army suffered almost 60,000 casualties of whom more than 19,000 were fatalities in a single day.

The distance between Albert and Bapaume is 15 kilometres or in the old imperial measure better known to the soldiers of the time, it is 10 miles. It was, according to the late military historian, Prof Richard Holmes, the longest 10 miles in British military history.

Four months later and having sustained 420,000 casualties, the British still had not reached Bapaume. This vast expenditure of blood and munitions only succeeded in moving the front line 11 kilometres (seven miles) forward from the July 1st starting point.

As one travels out of Albert, the road heads steadily uphill. Three kilometres outside the town, there is a sign marking the British front line on July 1st. Beside it is the first of hundreds of British memorials in this most evocative of battlefields.

Here there is a carved stone bench and tranquil garden dedicated to the Tyneside Irish and Tyneside Scottish regiments.

The inscription in English and French reads: “Greater love hath no man than this that he lay down his life for his friend. In front of this monument on 1/7/16 the ‘Tyneside Scottish’ and the ‘Tyneside Irish’ brigades attacked the enemy. For many hours the fortunes of arms fluctuated but ‘ere night had fallen the two Tyneside Brigades with the aid of other units of the 34th Division attained their objective.”

It is often assumed that the 36th (Ulster) Division was the division which suffered the most casualties on the first day of the Battle of the Somme. But the melancholy distinction of being the worst affected division belonged not to the 36th (5,500 casualties) but the 34th Division (6,380 casualties) on July 1st, 1916.

The 34th Division’s frontline was astride the Albert-Bapaume road in the centre of the battlefield. One of the three brigades within the 34th Division was the 103rd, better known as the Tyneside Irish Brigade.

This brigade, made up of the 1st, 2nd, 3rd and 4th Tyneside Irish battalions, suffered some of the worst casualties of the first day of the Somme.

But for the obduracy of the War Office and the appalling snobbery of Lieutenant Gen Lawrence Parson, the commanding officer of the 16th (Irish) Division, the Tyneside Irish might have been fighting with those with whom they had common kinship.

In late 1915, the Irish Parliamentary Party leader John Redmond proposed that the ranks of the 16th (Irish) Division should be filed up with recruits from the Irish in Britain or those of Irish extraction.

Recruitment in rural Ireland had been slow. The War Office would not countenance helping Redmond who had committed to, but had not succeeded in meeting the targets he had set himself. Parsons was even more dismissive. He would not countenance having “slumbirds” drawn from English cities in his division. He wanted only “the clean, fine, strong, temperate, hurley -playing country fellows”.

The brigade was made up of Irish-born and those second and third generation emigrants many of whom could trace their ancestors back to the famine. To be Catholic at that time was to be regarded as Irish even if one was a born and bred Geordie.

In the social pyramid of the industrial north-east, the Irish started out as the lowest of the low.

“It is perhaps a sad reflection on the state of things in Ireland that so many left and came to live in England where they would be despised and treated with contempt,” observed John Sheen in his regimental history Tyneside Irish.

The impetus for the raising of a Tyneside Irish brigade came from the Mayor of Newcastle, Cllr John Fitzgerald, a brewer born in Co Tipperary, and his predecessor, Johnstone Wallace, an Orangeman from Co Derry .

Both men were keen to emphasise their loyalty to the British war effort. For Fitzgerald, this would come at a terrible price. His son, Gerald, was killed on the first day of the Battle of the Somme.

The Irish in Britain also raised regiments in London and Liverpool, but the most successful recruitment was on Tyneside. Four battalions, more than 4,000 men were raised, by early January 1915. The Tyneside Irish and Scottish communities engaged in a period of competitive recruitment and the Irish won by a couple of days.

Recruitment posters appealed to the ancestral patriotism of the Irish race. One read: “Those who are inspired by that love of freedom dominant in the Irish race, and which is threatened by Germany’s lust for power, should enrol themselves in the TYNESIDE IRISH BATTALION and preserve for themselves and their children that glorious liberty so dear to the heart of every Irishman.”

Irish-born officers were drafted into the Tyneside Irish battalions. They included Lieut Maurice O’Connell, a grandson of the Liberator, VC winner Sergeant Michael O’Leary and Lieut Gerald Neilan, who would go on to become the first British officer to die in the Easter Rising.

It was said of the men of the 34th Division that it took two years to train them and 10 minutes to kill them.

The area in which the Tyneside Irish assembled for the attack, a mile behind the front lines, had names redolent of the ancestral homeland. One side was named the Tara Hills; the other the Usna Hills. The open ground they crossed as they moved forward was the Avoca Valley.

The German machine guns in the village of La Boisselle, that were to be silenced by the Tyneside Scottish kept up their deadly chatter, when the Scots fell back.

Having repulsed the Scottish, the Germans then trained their machine guns on the Tyneside Irish. The regimental piper played The Minstrel Boy as the men rose from their rear trenches towards the front-line trenches vacated by the Tyneside Scottish.

The Tyneside Irish were ordered to advance on a two-company front with each company in a column of platoons (approximately 50). There would be 150 paces between each company.

They marched line abreast – each man about an arm’s length away from the next. They presented an easy target.

Sergeant John Galloway of the 3rd Tyneside Irish recalled: “I could see, away to my left and right, long lines of men. Then I heard the ‘patter, patter’ of machine guns in the distance. By the time I’d gone another ten yards there seemed to be only a few men left around me, by the time I had gone twenty yards, I seemed to be on my own. Then I was hit myself.”

An unnamed Tyneside Irish officer told the Northern Echo. “The fighting was of the fiercest description, unsurpassed during this or any other campaign. The Irish advance never ceased, in spite of all the unadulterated hell they were going through,”

A few men heroically reached the village of Contalmaison, the ultimate objective of the 34th Division two and a half miles from the front line positions, but were taken prisoner. The Tyneside Irish had advanced further than any other brigade that day, but their losses were catastrophic.

The brigade sustained 2,171 casualties with at least 599 deaths, amounting to a 70 per cent casualty rate. Others would succumb to their wounds later.

One of the few authentic images from the first day of the Battle of the Somme is a long-angled lens view of the Tyneside Irish advancing across no man’s land. They are tiny figures set against a big horizon. For many this enduring image would symbolise the vastness of the Somme and the insignificance of the individual soldier.

A total of 7,325 men would serve in the Tyneside Irish in the war – 1,949 were killed. This amounted to more than one in four of those who served. The average rate of fatality in the British Army was one in seven of those who served during the first World War.