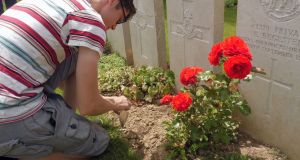 Chris Reddin at the grave of his Offaly soldier. Photo: Gerry Moore 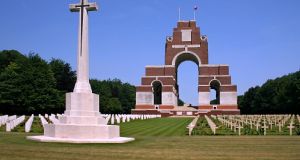 Thiepval Memorial to the Missing of the Somme

I teach history in St Columba’s Comprehensive School in Glenties, Co Donegal, and am the founder and director of a project called “My Adopted Soldier”, which commemorates soldiers from the island of Ireland who died in the first World War. In the summer of 2015 a group of 32 students from both Northern Ireland and the Republic “adopted” a soldier from their individual counties and spent three days visiting the Somme battlefields area of northern France.

In the early 1990s I was given an old photo of my granduncle who died in the first World War. Nobody seemed to know much about him, so I began doing some research.

Anthony Gallagher was from west Donegal, and I found out that he had joined the First Battalion of the Royal Inniskilling Fusiliers in 1915. He first saw action in Gallipoli in August 1915 and spent the next few months fighting there in atrocious conditions, but survived.

After a couple of months Gallagher and the Royal Inniskilling Fusiliers were all transported back to France to a town called Albert in the Somme region. They stayed there for a couple of weeks, as preparations began for a huge new Allied offensive.

On the morning of the July 1st, 1916, Allied forces attacked the German front lines. Gallagher and his battalion were among them. They ran headlong into a barrage of machine gun fire that mowed them down as they advanced. Within a couple of hours Gallagher and thousands of other allied troops lay dead in no man’s land.

His body was never recovered and his name is now one of the 73,000 on the Thiepval memorial to the missing of the Somme.

In the late 1990s I began to realise more and more just how many Irish-born soldiers died in the war during my visits to the battlefields of the western front. I organised visits for my students in Glenties, and in order to make the trips more meaningful I decided to get each student to “adopt” a soldier from Donegal who died in the war and to undertake some research.

I was fortunate to have the wonderful Donegal Book of Honour by Paddy Harte as my guide. As this worked so well and made such an impact on the students, I decided to do it on a national level and the planning began in 2014.

One student was chosen to represent each county and each was given the name of a soldier who died in the battle of the Somme from a database that I had already created. Students were asked to carry out research on the family background of the soldier and his military career.

We also encouraged students to make contact with living relatives of the soldiers. Leslie McCarthy from Tralee researched the story of Charles Francis Conway and made contact with relatives during an interview on Radio Kerry. Beibhinn Breathnach from Kilkenny adopted Pte Patrick Delaney and also met his relatives.

Each student gathered as much information as possible, which is now online on the website archive page.

When we arrived at the Somme we visited many cemeteries and each student placed a small piece of soil from Ireland on the grave of their soldier. All found it to be a very moving experience, as they all felt they knew their soldier so well by the time they got there. One of the highlights was the time the students spent at the Thiepval memorial to the missing of the Somme. Each laid a rose at the foot of the cross of sacrifice in memory of a soldier from their county who is commemorated on this memorial.

Dublin student Katharine Woods read a poem by Thomas Kettle. Donegal student Ryan Craig read a poem by poet and writer Patrick MacGill, a soldier in the war. David Moore sang a song written by David Dunlop in memory of Pte Anthony Gallagher called The War to End All Wars.

Donegal student Manus McDyer played a hauntingly beautiful slow air on his fiddle in memory of all the Irish soldiers whose bodies were never found.

The next “My Adopted Soldier” trip is now being planned for the summer of 2017 to remember the soldiers from the island of Ireland who died in the battle of Messines in Flanders, Belgium. During this battle the 16th Irish Division and the 36th Ulster Division advanced together against the German front line near Ypres in Belgium.

From the start I was lucky to be able to work with a very dedicated group of individuals who helped make the project a reality – Angela Hanratty, Melissa McManus, Mary McLoughlin, Ruth Galbraith, Michael Collins, David Dunlop and Michael Naughton. Marian Harkin MEP secured funding and we received sponsorship from EU travel company Saffron Travel and Raudon Teoranta. The History Teachers of Ireland promoted the trip in schools nationally.

Aidan Rafferty created our website (myadoptedsoldier.com). Eileen Magnier of RTÉ was interested from the start and joined us in the Somme with cameraman Brian McVeigh. This resulted in a two-part Nationwide special, which was broadcast in November 2015.