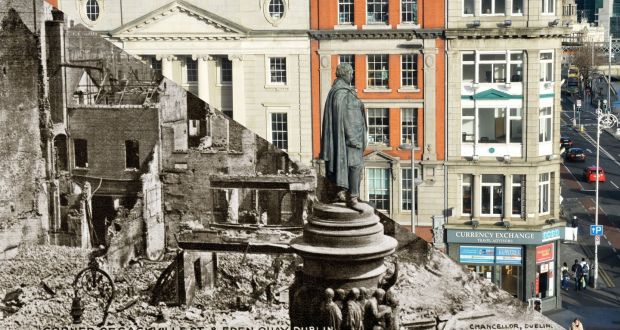 The title of this book provides an accurate summation of its ambitious scope. Alexandra Slaby, lecturer in English at the Université de Caen and current editor of the highly regarded journal Études Irlandaises, has set herself an awesome task, namely to cover over a century of Irish history (a century that is arguably more tumultuous than any other in the Irish context) in the space of a little less than 500 pages. The author is a specialist in what the French refer to as “Civilisation”, a discipline that covers history, politics, religion, economics and society: in other words, pretty much everything apart from literature.

The decade of centenaries (2012-2022) provided a pretext for looking back at how Ireland has evolved in the past 100 years, especially in terms of its relationship with our closest neighbour, Great Britain. The historic and emblematic visit of Queen Elizabeth in 2011 illustrated the degree to which the former colony was determined not to be a prisoner of the past and to accept that there was more to gain from having a mutually respectful relationship with its main trading partner than from railing against its perfidiousness. The recent Brexit vote has foregrounded the dependence Ireland has on Britain, a dependence that has grown in accordance with the closer bonds that have developed between the two countries.

In 1912, the main concern in Ireland was with Home Rule, which seemed imminent. However, in 1922, after the unsuccessful but symbolically important 1916 rebellion, a nasty War of Independence and a bloody Civil War, the country was still divided along geographical and politico-religious lines and the deep scars that these caused took a long time to heal. The decision taken by Slaby to devote a full section at the end of her book to Northern Ireland is more than justified by the different route that province took to the rest of the country, mainly as a result of the Protestant majority being in power there.

Slaby notes the absence of any real intellectual tradition in Irish Catholicism, which had the effect of stifling our cultural development and leading to a certain apathy when it came to Irish people engaging critically with their faith. This allowed the Catholic clergy, drawn in the main from a rural background and trained to be effective pastors rather than enlightened theologians, to dominate virtually all sections of Irish life, including sexuality, with the disastrous consequences of which we are now aware. It should be stated that the Catholic Church did not evolve independently from the people, but rather reflected the type of church that the majority of the population wanted at any given time.

The link between Catholicism and nationalism, between church and State (so obvious during the long reign of Éamon de Valera, who, according to John McGahern, looked “more like a lay cardinal than a revolutionary”), was a vital element in the creation of a sense of Irishness that became almost indissociable from the majority religion.

Slaby’s study will probably not provide too much that is new for people already familiar with modern Irish history. That is understandable given that she is writing in the main for a French audience. She relies a good deal on the main historians of the twentieth century and quotes extensively from Diarmaid Ferriter, Joe Lee, Dermot Keogh, John A Murphy and Roy Foster in particular. The danger with such an approach is that it could deprive the author of putting her own imprint on the material. In fairness to Slaby, however, she definitely demonstrates a mastery of the area, which is a tribute to the painstaking research she has invested in this book, which would appear to be the result of many years of background reading and reflection. That said, it would be nice to hear more often how her view of Irish history differs from the canonical figures she cites, many of whom are very much at variance with one another, as we well know!

Inevitably, there are times when the analysis is sharper than at others. One area in which Slaby’s analytical powers shine through is in her treatment of the Emergency years, the problems associated with Irish neutrality and the pressure the British exerted on de Valera to make our naval ports available to the Allies. As an outsider, Slaby is probably better placed to view de Valera more objectively than most Irish people can ever do. The same is true of her treatment of Archbishop John Charles McQuaid, whose work on behalf of the poor is praised and who is portrayed generally in quite a sympathetic light. Equally, rather than being presented as a “cultural desert”, Slaby sees the Emergency as a time when Irish artists and intellectuals started coming to grips with modernism and ceased reproducing a mythical vision of the idyllic rural countryside that was so popular during the Revival.

The treatment of the 1960s (which, according to Slaby, in Ireland went from 1959 to 1973), the steady growth of secularism in the 1970s and ’80s, brought on by improved educational opportunities, greater disposable income, foreign travel, a steady migration from the country to the cities, high levels of emigration, the divisive referenda on divorce and abortion, are all dealt with in an authoritative manner.

Archbishop McQuaid died in 1973 and the first McDonalds restaurant opened in Ireland in 1977: in a way, these two events demonstrate a changing of the guard, as the custodian of traditional Catholic values was replaced by the avatar of globalisation. At the same time, Irish debt was spiralling out of control, crippling strikes brought the country to a standstill, unemployment reached record levels and politicians like Charles Haughey and Garret FitzGerald vied for power during what was a real economic and existential crisis for Ireland. The importance of The Late Late Show in bringing about discussion of taboo subjects is underlined by Slaby. The visit of Pope John Paul II to Ireland is correctly seen as the end of triumphalist Catholicism and the beginning of a period of growing opposition to the church’s authority.

By the early 1990s de Valera’s inward-looking, impoverished and conservative country had given way to a brash, prosperous, global society where money was the new god, shopping malls the new cathedrals for a population ever eager to acquire goods and spend money. Slaby reproduces some stark statistics supplied by Fintan O’Toole in his book Ship of Fools, which calculate that in 2007 1 per cent of the population in Ireland controlled 20 per cent of the country’s wealth, 3 per cent had 30 per cent and 5 per cent had 40 per cent.

It is strange how in the period of austerity following the collapse of the Celtic Tiger the gap between rich and poor has become even more pronounced. Politicians, bankers, developers, media outlets and the general public all contributed to the frenetic spending spree made possible by the limitless supply of cheap credit during the years of unprecedented economic growth. The Catholic Church, by then undergoing a crisis of its own due to the clerical abuse scandals, was not in a position to speak out effectively for those who were being lost sight of during the boom years, namely the poor and the marginalised.

Slaby is insightful in her treatment of the period of austerity and the painful path that has been the lot of Irish citizens in the past 10 years or so. An Taoiseach Enda Kenny reported in 2015 that up to 250,000 Irish people have emigrated since the economic collapse in 2008. Slaby maintains that the figure is closer to 400,000, which she claims would be the equivalent of France losing 5.7 million of its inhabitants, a sobering statistic.

If politicians speak of recovery, the question they should be asked is: At what cost? The vast majority of those who have left the country are young people who would have little or no chance of making a life for themselves in Ireland were they to return from abroad. Many did in fact come back to vote in the same-sex marriage referendum, which was carried by a reasonable margin in 2015. While that result was a comfort for many, especially those forced for many years to hide their sexual orientation for fear of discrimination, it has done little or nothing to dispel the serious mental health issues that are causing so many young people to take their own lives and/or to engage in self-harming, the homeless problem that is endemic at this stage, the huge rents being charged for those wishing to live in cities and who cannot afford to buy a house (if one were available in the first instance), overcrowding in our hospitals, gang warfare in our streets, an inability to pay mortgages leading to the repossession of family homes, the continued arrogance and intransigence of the banks which have been bailed out at huge cost to the Irish taxpayers.

This is the reality of present-day Ireland. If we thought we had problems in 1912 (and we definitely did), we still have many obstacles to overcome before we can even come close to considering ourselves a just and fair society almost one hundred years after gaining independence in the southern part of the country. In the words of the famous Fianna Fáil 2002 election slogan: “A lot done, More to do”. One could add: “A lot more”.

Reading Alexandra Slaby’s beautifully written book, which is attractively packaged by Tallandier, forces one to reappraise recent Irish history and to see the extent to which this island (as already stated, she does deal with the entire country, north and south) has changed in the past 100 years. French readers with an interest in Ireland (and they would appear to be numerous) will undoubtedly find this book invaluable and that in itself is a tribute to the author and publishing house who brought it to print.

Eamon Maher is Director of the National Centre for Franco-Irish Studies in IT Tallaght, where he lectures in humanities. His latest book, co-edited with Eugene O’Brien, The Cultural Legacy of Irish Catholicism: From Galway to Cloyne and beyond, will be published in April 2017 by Manchester University Press. For more details, check out the following link.