The long road to equality 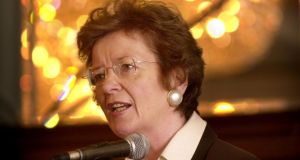 “I didn’t wash my finger for two days, purposely avoiding the water just so that the blue stain I received when voting remained there for as long as possible” – Alaa Murabit, co-founder of the Voice of Libyan Women

When I read Alaa Murabit’s account of voting for the first time in Libya some weeks ago, I wondered if her experience was similar to that of the Irish women active in the campaign for female suffrage one hundred years ago. Hanna Sheehy Skeffington and the other Irish campaigners followed in the footsteps of Anna Haslam and the 19th-century activists, and would themselves provide inspiration for later campaigns, including the women’s movement of the 1970s with which I was involved.

Their campaign for female suffrage was intertwined with, and reflective of, the tensions, struggles and successes of the various political movements of the period: nationalism and unionism, Home Rule and the struggle for independence, socialism and labour. It would provide the foundations for the realisation of many of the political, social and economic rights attained by Irish women over the past century.

I began my journey as President in 1990 in the hope that women who had felt themselves outside of history would be written back into history – in the words of Eavan Boland, “finding a voice where they found a vision”.

“His” story has become “our” story as a generation of Irish feminist historians discovered that missing voice. This publication will bring to life the Irish struggle for female suffrage and underscore the scale of the challenge faced by feminist leaders in their efforts to secure for women the right to vote.

Irish women face many challenges today, but by examining our experiences in an international context, you get a sense of how far we have come since the 1970s. The challenges faced by women internationally will be very familiar to an Irish audience. They relate to political empowerment, health and reproductive rights, economic opportunities and educational attainment.

The World Economic Forum’s Global Gender Gap Index ranks 135 nations according to progress made in each of these four areas. The 2011 report concludes that no country in the world has achieved gender equality and that women remain well behind men in two crucial areas: political equality and economic power.

Less than one-in-five parliamentarians in the world today are women and yet all of the evidence suggests that countries experience higher standards of living when women are empowered as political leaders. Positive developments can be seen in education, infrastructure and health, and concrete steps are taken to make democracy more effective. Traditional barriers to political participation – lack of adequate financial resources, disproportionate family obligations and lack of confidence in a predominantly male culture – continue to deter or defeat women candidates.

The promise of the Arab Spring has yet to materialise for Arab women although they emerged as key civic leaders in its initiation. Women in the the region are battling for fundamental human rights in a political landscape that is frequently hostile to women’s rights and participation. The stereotypical view of the invisible Arab woman was shattered by images of women standing side by side with men in protests in Yemen, Tunisia, Egypt and Libya. However, women’s empowerment can only be progressed by their involvement in political processes and in the shaping of new constitutions that guarantee the rights of all citizens equally. Increased violence against women in many of the region’s cities threatens to undermine fragile gains made in the past year. Egypt’s Tahrir Square, symbol of change a year ago, has become a place where women are singled out for sexual harassment.

For Alaa Murabit, founder of a Libyan women’s NGO, the desire to make Libya a place Libyans can be proud of is slowly disappearing “in the midst of corruption, lawlessness and a lack of ownership over decisions made in a post-revolution Libya”. But Alaa believes that the citizens of Libya will defend the democracy for which they fought and ensure that their opinions are heard. Challenging the patriarchal norms that have dominated these societies and restricted women’s political participation will take time; these were not revolutions for gender equality. Women across the region need and deserve our solidarity and support in their pursuit of human dignity.

In an address to the Asia Pacific Economic Co-operation Summit last year, Hillary Clinton said that “barriers and restrictions, some formal, some informal, erode women’s abilities to participate fully in their economies and to support their families whether as employees or entrepreneurs”. The World Economic Forum’s Global Gender Gap Index stated that one of the most persistent gender gaps is unequal access to economic opportunities. In the developing world women bear the overwhelming burden of extreme poverty and deprivation, accounting for 70 per cent of the world’s poorest.

There are deep-seated gender differences in time use, rights of ownership and control over land and assets, access to productive assets and credit, and access to training and education. As Secretary Clinton stated: “When everyone has a chance to participate in the economic life of a nation, we can all be richer.”

The motto of The Irish Citizen newspaper, published by the Irish Women’s Franchise League from 1912 to 1920, encapsulates not only the ideals of the campaign for female suffrage in Ireland but the longing of women the world over to be equal and active citizens in their societies: “For men and women equally the rights of citizenship; from men and women equally the duties of citizenship.”

Grassroots women’s organisations are emerging in countries across the world as women recognise the potential of co-ordinated action to bring about change, and the need to fill the vacuum left by political leaders who have failed in their duty to protect and defend the rights of men and women equally.

In awarding the Nobel Peace Prize for 2011 to President Ellen Johnson Sirleaf, Leymah Gbowee and Tawakkul Karman, the Norwegian Nobel Committee expressed the hope that it would help to bring an end to the suppression of women that still occurs in many countries, and to realise the great potential for democracy and peace that women can represent.

Inspired by the recognition of three powerful women leaders, the struggle to unleash the full strength of that potential continues apace. Irish women’s organisations will continue to address the needs of Irish women but they must also look to champion the rights of women beyond our borders who are disempowered and oppressed, and support the courageous leadership of women such as Alaa Murabit who have such barriers to cross.

State to mark Cork’s pivotal role during War of Independence