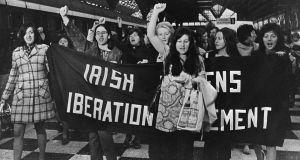 Feminism is a “deeply subversive vision”said poet Catherine Phil MacCarthy, who had been invited, in an imaginative move, by the Irish Feminist Network to open its 2012 conference on Feminist Activism in Ireland, Past Present and Future. As MacCarthy spoke the simmering among angry young women in the room was wonderful.

Linda Kelly, co-founder of Cork Feminista, has described the fury with which she and other young Irish feminists hear older feminists lamenting that young women nowadays are just not interested in feminism, and don’t appreciate the battles it took to win them freedoms they take for granted. This despite what Kelly sees as a significant resurgence of activity, particularly among students. “The result is devastating,” she writes. “A generation of excited and passionate activists is slowly being made to feel invisible.”

Kelly says that “our generation is simply figuring out our own way of doing things” with “online connections with well-thought-out branding” as the tool of choice to engage young audiences. Groups “command popular support across new media sites like Facebook, Twitter and their own blogs that get tens of thousands of hits.” They are contending with the flourishing of online pornography, while a kind of retro-sexism has become ubiquitous in mainstream advertising.

Aisling O’Connor of conference organiser Sibéal (a network of postgraduate students working on gender studies) says that young feminists have also taken part in, and initiated protests over, issues like cuts to social welfare support for lone parents (the vast majority of whom are women) and for changes to abortion law. She notes, interestingly, that many of these young people are unwilling to call themselves feminists. It may take more than branding to solve that dilemma.

“So many people think that the women’s movement was born on some mystical date in 1970, like Aphrodite rising from the waves,” wrote Hilda Tweedy, explaining why she wrote the story of the Irish Housewives Association, which she helped set up in the 1940s. In reality, she continued: “It has been a long continuous battle in which many women have struggled to gain equality, each generation adding something to the achievements of the past.”

The fine essays in this supplement will help us rise to what Mary Cullen has identified as the challenge to incorporate feminist history in the mainstream, We must learn from our history. There is much to celebrate, because feminist campaigns from the late 19th to the early 21st centuries have led to, and continue to bring about, huge advances in women’s rights in this country. Make no mistake, we would not have the right to vote, to get a divorce, to obtain contraception or demand redress for discrimination in the workplace, without feminists having struggled.

We would not know of the horrific extent of male violence against women and children. We would not have this year’s Electoral Amendment Bill. Feminists have confronted the shame which was used to oppress earlier generations of women, in, for example, Magdalene laundries. They have played a central role in the modernising of Irish society.

However, feminism has never become popular. Many women in Ireland who assert their rights and show solidarity with, and compassion for, other women, insist they are not feminists. The Irish women’s movement has been riven by quarrels and splits, notably over the national question. There has been a dearth of new ideas on questions of class, an intolerance of dissent.

The contribution men can make remains uneasily undefined. Having, in Michael D Higgins, a male president who is avowedly a feminist, and has a record of activism to prove it, should help.

Structures have been problematic. Feminist organisations have struggled with tensions between respectability and the radical, subversive nature of their political analysis. The withdrawal of state funding has been used to silence protest.

Irish feminism has often seemed strangely uncomfortable with powerful women, and has a troubled tradition of only begrudgingly handing over the mantle to the next generation. The late June Levine described feminists of the mid 1970s as “young, brilliant, bursting with energy and commitment”. They were ready to toss the old guard of feminism aside to make way for the new. One of the most brilliant of that generation, journalist Nell McCafferty, went on to chart the fierce “wars of the womb” of the 1980s, when feminists were pitted against the “unborn”.

In 2011 McCafferty said on radio that Irish feminism had gone. It hadn’t survived that onslaught. It might rise again some time in the future, but for now, it had disappeared.

It hadn’t, of course. It had just changed. Flamboyant gestures like the Contraceptive Train had yielded to the hard graft of running services, raising funds, lobbying European and international bodies. A new generation was rising – as Ivana Bacik has pointed out, it was student feminists (among whom she was prominent), who went on to lead the struggle for abortion rights in the aftermath of the X rape case in 1992. That campaign continues, with the Irish Family Planning Association working alongside feminist activists including Choice Ireland and the new Action X group, as well as supporting women who took cases to the European Court of Human Rights.

Those who fought so hard and selflessly for our suffrage would be appalled by the current gender balance in the Houses of the Oireachtas. Just 15 per cent of TDs are women. Bacik, in her role as a Senator, has made a huge contribution to our understanding of why this democratic deficit persists. The new law, which penalises parties which do not apply candidate selection quotas, will certainly bring some degree of change. However, it does not apply to local elections, where many politicians cut their teeth, and currently just 17 per cent of councillors are women.

Candidate selection is also, of course, just one of five key barriers to female progress. A serious and radical programme of actions to make public life in Ireland family friendly will be needed and there is no sign that investment in this is contemplated. Significant numbers of the women who have made it into the male bastion of Irish politics have done so as part of political dynasties, while others toe conservative party lines and make no effort to bring about change for other women.

Some of our relatively powerless senators have been the strongest advocates of feminism – as well as Bacik, Senator Susan O’Keeffe has promoted the 50/50 campaign with its clear goal of having half of Irish politicians female by 2020. Katherine Zappone has campaigned for gay rights, including marriage.

The new generation of feminists has to deal with a government (like the one before it) which has ignored international warnings that women’s equality is central to economic growth and should not be compromised during hard times.

Women still earn less than men, and are rare in Irish boardrooms. Irish women still overwhelmingly have responsibility for childcare, elder care and housework, trapping many, particularly among the poor, in the domestic sphere.

Sexism has deep and tangled roots in our Irish culture, and there is also a strong sense today of feminist responsibility in a global context.

Migrant women in Ireland are part of today’s womens movement and have particular needs. As Mary Robinson highlights elsewhere in this supplement, climate change is impoverishing and displacing millions of women.

There are horrific levels of domestic and sexual violence here and around the world. We should be glad that there are young feminists biting at the heels of their more established sisters. All of their energy is needed, all of their passion, their necessary willingness to be subversive.