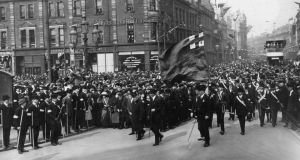 Lord Charles Beresford, Frederick Smith and Edward Carson head a protest rally against Home Rule at City Hall, Belfast, for the signing of the Covenant on Ulster Day, September 28th, 1912.

Ulster was home to an array of suffrage organisations. The North of Ireland Women’s Suffrage Society was established by pioneering feminist Isabella Tod circa1873.

By 1914 there were 20 suffrage associations with a collective membership of 1,000, ranging from the militant Belfast-based Irish Women’s Suffrage Society (IWSS) to constitutional bodies such as the Church League for Women’s Suffrage. A branch of the Men’s Political Union was established in Belfast, the only all-male suffrage society ever operative in Ireland. Attempts were made to unify the movement. The Irish Women’s Suffrage Federation (IWSF), formed on the suggestion of Miss L A Walkington of Lisburn Suffrage Society, provided some cohesion, but, although an all-Ireland, politically neutral body, it never embraced all the groups, excluding more militant organisations from its ranks. Some organisations aligned to it also flouted its policy of neutrality. Whitehead Suffrage Society, for example, closed meetings with a rendition of the national anthem, vocally identifying with unionism.

In Ulster, as elsewhere, middle-class women formed the kernel of the suffrage movement, though considerable efforts were made to make the vote seem relevant to all classes. Addressing an open-air meeting at Belfast’s Ormeau Park in 1913, Mrs Chambers, a particularly vocal Ulster suffragist, emphasised the fallacy of denying women the vote: “The Law . . . says a woman is quite competent to perform a surgical operation, yet not tell the difference between Joe Devlin and Sir Edward Carson . . . if it were women’s work to fit the children to go into the world, it was equally important to see that the world was a fit place for their children.” Lunchtime suffrage meetings were held outside factories in Belfast and Derry and petitions were signed, but progress was limited. This prompted radical bodies such as the IWSS into militancy, which further divided the movement.

The political climate of the period was challenging for suffragists. Political parties saw women’s suffrage as a divisive issue and none would adopt the cause, and, in an Irish context, many focused solely on home rule. The IWSS remarked: “In Belfast, nothing will be entertained but home rule struggling with unionism.” Many suffragists were antagonistic towards women who worked either for or against home rule without aligning this to the suffrage cause; this stance deprived the movement of much support.

In 1913, the unionist leader, Sir Edward Carson, himself opposed to suffrage, unexpectedly announced that women’s suffrage would be granted under plans for a provisional government in Ulster.

Suffragists claimed a victory, but Carson’s pledge was never confirmed or fulfilled. Following the formal constitution of the unionist provisional government in September 1913, no mention was made of women, Carson emphasising “they wanted men who would devote their time and make great sacrifices”. Pessimism concerning unionist sincerity became widespread amongst suffragists and their criticism of unionist women intensified, ridiculing the 115,000 members of the Ulster Women’s Unionist Council for “crawling servility” to male unionists.

Reneging on this pledge also prompted the establishment of a branch of the British-based Women’s Social and Political Union (WSPU), founded by the Pankhursts, in Belfast, placing the city in what contemporaries called a “genuine revolution”. Militant tactics in Ulster such as window-breaking, cutting telephone wires, destroying mail and heckling politicians predated the arrival of the WSPU.

From late 1912 the IWSS had turned to militancy, arguing that “if legalised protection of little children could be brought a week nearer by our vote, [they] defied . . . women . . . to say that we would not be right to burn down every public building”. The level of militancy increased dramatically with the WSPU’s arrival; the IWSS was absorbed into its ranks by April 1914.

Dorothy Evans, the WSPU’s Ulster organiser, wrote a series of letters to Carson, and members of the Belfast WSPU held a four-and-a-half-day vigil at his London home. Carson eventually received this deputation, but blamed his party’s disunity on the question for not pushing for suffrage. Evans, at a meeting in Belfast’s Ulster Hall, “declared war” on Carson. Arson became the keynote of a campaign, culminating in a bomb attack on Lisburn’s Church of Ireland Cathedral on July 31st, 1914. Such acts provoked widespread hostility; the four women arrested for this attack needed police protection from angry crowds. Thirteen women were arrested for militancy in Ulster from March to August 1914, using thirst and hunger strikes of up to six days duration to secure their release.

Suffragettes called a truce on the outbreak of the first World War, though a minority continued campaigning. Some, like Belfast militant Margaret McCoubrey, combined suffrage with pacifism; others, like the northern committee of the IWSF, conjoined war work with suffrage. The dynamism of the pre-war suffrage campaign was never regained; political differences always divisive to the movement only intensified after women’s partial enfranchisement and the war’s end in 1918.