Brian Boru at the Battle of Clontarf: a medieval version of 1916?

The bloody clash will be re-enacted in April. Is our understanding of the real thing accurate? 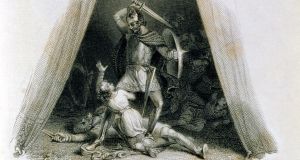 John Ford’s great movie The Man Who Shot Liberty Valance ends with the line “When the legend becomes fact, print the legend.” It is a dictum whose force professional historians are constantly pitted against. And we have a toffee-nosed tendency to assume the popular recollection of events is flawed.

But is it always so? The life – and especially the death, 1,000 years ago this April – of Brian Boru is a case in point. Whatever his many other achievements, Brian Boru is remembered today for the Battle of Clontarf, and for being the hero who led his people to victory over their would-be conquerors.

Since then the Irish have in some respects thought of 1014 as the medieval equivalent of 1916: if the bloody execution of the leaders of the Easter Rising represented lives sacrificed in the cause of Ireland, so the Battle of Clontarf, taking place on Good Friday, had associations with Christian martyrdom, in the form of King Brian’s death in his hour of victory over the heathen Norse.

Unceremoniously debunked
But this traditional interpretation has been under assault over the past 75 years, since Fr John Ryan, a professor of medieval Irish history at University College Dublin, published an essay in which he unceremoniously debunked the established understanding of the battle and claimed that it was little more than the culmination of a rebellion against Brian, the king of Munster, by the insubordinate king of Leinster and his Dublin sidekicks.

This revisionist version has become so powerful that the opening scenes of a TG4 documentary on Clontarf, to be aired on Good Friday, subliminally reinforce it with footage of a Leinster-Munster rugby match – as much as to say that Clontarf was little more than a medieval interprovincial grudge match.

Although there are untrue aspects of the traditional belief that the Vikings were banished from Ireland following their defeat at Clontarf (Dublin and the other Norse enclaves were in fact to remain inhabited, wealthy and powerful), the new orthodoxy about Clontarf, as nothing more than a bloody local quarrel, simply will not do.

The extraordinary thing is that Clontarf was a victory for Brian even though he was killed there: that is the almost unanimous consensus of our medieval sources. But how can that be? The only way is if, notwithstanding Brian’s death, his forces achieved what they wanted to achieve on Good Friday 1014, and could reluctantly accept his loss as the price that had to be paid for what had been secured or averted on that day.

International contest
The Battle of Clontarf was an international contest. England, much wealthier and in a far better position to defend itself than Ireland, had been conquered just months before Clontarf. The victors were the Danes under Sveinn Forkbeard (who already ruled much of Norway); England’s Anglo-Saxon king Etheldred the Unready was sent into exile.

The weeks leading up to Clontarf were extraordinarily frenzied because Sveinn then died, and King Ethelred was temporarily restored, delaying the succession of Sveinn’s son, Canute (who would go on to rule England, Denmark and much of Norway and Sweden for the next 20 years).

In April 1014 there were Danish chieftains and large numbers of Danish warriors who had seen their conquest of England slip away before their eyes. Surely the vast Scandinavian fleet that descended on Dublin Bay in Easter Week had some of them among its ranks, anxious to make up for lost English ground in what they were no doubt promised would be a cakewalk in Ireland.

Instead their voyage led only to the “slaughter of the Foreigners of the Western World” at Clontarf. That slaughter is what earned Brian his lasting reputation. It is because of it that the Norse poet could write “Brjánn fell ok helt velli” – “Brian fell and was victorious.”

Let us hope that, in the flurry of commemorations to take place this year, sight is not lost of the real Brian Boru and of his real achievements. He is so intrinsic to the Irish imagination that the emblem of the nation, displayed on everything from our coinage and the presidential standard to Mr Guinness’s pint of plain – and on display in Trinity College – is the Brian Boru harp. You could hardly imagine it being called anything else.