95-year-old Nancy Dillon lays a wreath at the newly erected gravestone in memory of her father, James Matthews, who was shot dead in Croke Park on Bloody Sunday, November 21st, 1920. Video: Elaine Edwards 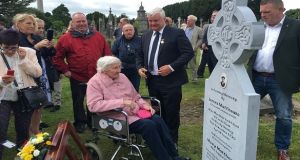 Nancy Dillon from Dublin and about 60 members of her extended family attended the ceremony. Photograph: Elaine Edwards

A 95-year-old woman laid a wreath on Saturday at the grave of the father she never knew, who was shot dead by British forces along with 13 other civilians at Croke Park on Bloody Sunday 1920.

Nancy Dillon from Dublin and about 60 members of her extended family attended a ceremony at Glasnevin Cemetery for the unveiling of a headstone over the grave of her father James Matthews.

Mr Matthews was 38 when he was shot dead in the Croke Park massacre during a Dublin-Tipperary hurling match on November 21st, 1920 during the War of Independence.

British troops opened fire on the 5,000-strong crowd and on players following an IRA operation to kill British agents in Dublin earlier the same day. Hundreds were injured.

Fourteen men, including nine army officers were killed during the earlier operation directed by IRA chief of intelligence Michael Collins and a fifteenth was fatally wounded.

It was the first time she had visited the grave because, until now, her father was one of a number of the victims who had been buried in unmarked plots.

A project involving the GAA, the Glasnevin Trust and families of the Bloody Sunday dead has led to their final resting places being identified.

A similar ceremony was held in Glasnevin on the 95th anniversary of Bloody Sunday last November where a headstone was unveiled on the final resting place of Jane Boyle, also shot dead that day.

Speaking at the graveside, Mr Matthews’s grandson Jimmy Lynch said his grandmother must have gone through great pain in the aftermath of events that day, when she lost her husband and had to raise three daughters on her own.

“God knows how she did it.”

GAA president Aogán Ó Fearghail told those in attendance that Bloody Sunday had been one of the seminal moments in the history of Croke Park, the GAA and in Irish history.

Remembering Mr Matthews, from North Cumberland Street, as “a true blue Dub”, he said: “We always have remembered; we always regret what happened. It was a very defining period not only for Irish history, but it was a defining period for the GAA.”

Behind the words “iconic” and “historic” lay a “simple human tragedy of people like your blood relative who went to a match to cheer on their team and didn’t come home”, he told the gathering.

Acknowledging the work on the project by Cian Murphy of the GAA, Mr Ó Fearghail said the organisation had been delighted to be involved with the family of James Matthews to ensure that his memory and his final resting place were fittingly recognised. Mr Matthews’s young daughter Mary is buried in the same grave and Connie rests elsewhere in Glasnevin.

Nancy Dillon said it had been a lovely ceremony. “I did not know him. I had only seen his picture,” she said.

The grave was blessed by Msgr Eoin Thynne and a lone piper played Amazing Grace and concluded the ceremony with Amhrán na bhFiann.

The Bloody Sunday Graves Project said it was indebted to the assistance of GAA journalist and author Michael Foley, author of a book on Bloody Sunday entitled The Bloodied Field.

Those who died at Croke Park on Bloody Sunday were: