‘At dawn, they rose from the sodden ground and charged forward, bayonets fixed’ 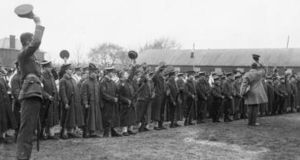 The second battalion of the Royal Munster Fusiliers looked forward to a quiet run-in to Christmas when they were stood down at brigade headquarters on December 20th, 1914.

The battalion was still recovering from the catastrophe at Etreux, northern France, on August 27th during the retreat from Mons when all but 200 men from a complement of nearly 1,000 were killed or taken prisoner.

The Munsters were billeted in the town of Bailleul on the Belgian border. The time was spent training the young reservists called up to ameliorate the terrible losses suffered by the battalion in previous engagements.

On the morning of December 20th the battalion looked forward to Christmas in billets behind the front lines with plum pudding, letters and presents from home and the Christmas boxes given to every soldier by Queen Mary.

Their expectations were short lived. At 5pm the 3rd brigade of the BEF 1st Division, which included the Royal Munster Fusiliers, were told to march northwestwards to fill an emerging gap in the British lines.

Sikh soldiers were holding a line of trenches in front of the village of Festubert. The profound cultural shock of moving continents to a murderous quarrel which they neither understood nor cared about was compounded by the damp, cold and mud.

At Festubert the Germans shelled their trenches until the Indian Division was forced to withdraw. Any breach in the line might leave the situation open for the Germans to march through to the Channel ports. The British commander-in-chief Sir John French ordered that the trenches be retaken.

So, as night fell on December 20th, the Munsters found themselves marching in the pitch darkness of mid-winter with the rest of their brigade in the direction of Melville.

They marched on and off for 36 hours across fields where the glutinous, smothering mud sapped the energy out of exhausted and sodden men.

On December 21st, the battalion was held in reserve ready to attack the German lines. Before dawn on December 22nd, they were given the order to assault the German trenches at 7am. In the three-hour hiatus between the order and the attack, the men slept, the first sleep they had for two nights.

At dawn, they rose from the sodden ground and charged forward, bayonets fixed. Scores of men including senior officers were killed. Wounded men fell into waterlogged shell holes and drowned. The trenches were taken at a terrible cost.

The weather was foul beyond imagining for men huddled and shivering in the profound bleakness. Sleet and snow swept in from the English Channel. “We lay in the ditch all day, thirsty, hungry, cold, longing for darkness to fall and give us an opportunity to stretch our legs, hoping that food and supports would be brought up to us,” wrote one afterwards.

Back at headquarters Maj Julian Ryan became concerned as no word filtered back about the battalion’s whereabouts. Six men were sent out to locate the battalion. Stumbling across fields rendered almost impassable by shelling, they finally located the Munsters.

The six men returned to headquarters to report the battalion had been found and were in dire need of assistance. Luckily it was the darkest time of the year as daylight would mean certain death or capture for the Munsters if the Germans saw them.

The six men returned retracing their steps in the darkness. Any illumination would give away their position.

Finally at 4am on December 23rd the exhausted companies had time to extricate themselves from the situation. Many of them had not eaten for 60 hours and were delirious with exhaustion. The stand of the Munsters at Festubert had been an epic of endurance, but they had held the line.

On Christmas Day, Mass was offered for the seven officers and 200 men killed at Festubert on that “dreadful night of carnage”, according to the battalion’s chaplain Fr Francis Gleeson.

“Such desolation. Such suffering! If all militarists had hearts at all they should bleed, if they saw the scene of frozen men I saw today – this Christmas day of 1914 AD,” he wrote in his diary.

“How I felt on that death region today! Good Saviour of the world – will you deem to bring peace and abolish all war forever!”

Summer is an astonishing finale to a prescient series
10