From the archive: ‘The true junk lover knows that time is even more essential than money to successful junk hunts’ 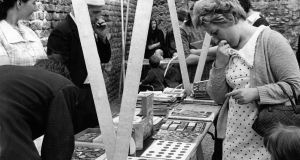 “To all those who are fed up with chrome and formica but not quite ready to become antique experts, Dublin offers a wilderness of in-between nostalgia.” So goes the standfirst of a piece that appeared in this newspaper in April 1971. “Elgy Gillespie went hunting for WOMEN FIRST, and today and tomorrow we offer a complete and comprehensive guide to WHERE THE JUNK IS.” Women First was the newspaper section, and Gillespie was an emerging feature-writing star. In this piece, Gillespie, who was barely out of her teens, hunted for secondhand homeware, and almost 50 years later, offers a map of Dublin shopping that has largely disappeared.

“It is a nice feeling to own an object that someone once owned before you, and someone once put a bit of work into,” she wrote. “Things acquire identities as they age, much as people do: an object hot from an assembly line, be it ever so functional and design-award-winning, never inspires the same pride of possession as something you took a long time to root out and clean up.”

Gillespie had a warning for readers at the outset: “This isn’t a guide for people who collect French 18th century furniture. They will already know where to find it, or will at least have a friend in Molesworth street who can tell them. This is simply an incomplete list of places, from the slightly touristy to the very cheap, where you can buy old things you can live with and use.”

The first stop was Dublin’s quays, an “Irish dealer’s Mecca since the firm of Butlers was established in the early 1800s.” Most of the showrooms at the time on Bachelor’s Walk and Ormond Quay had weekly auctions. Gillespie recommended Balfe’s and Gately’s at the end of Ormond Quay to the likes of “a young couple trying to collect basic furnishings, or the odd curiosity to individualise a furnished flat.” The reporter recalled one of her own hauls from Gately’s. “I once bought a vast art-nouveau cabinet with seven mirrors, a marble-topped tiled toilet-stand with a white china bucket, an olive green velour bedspread, three bolsters, and a lavender bag for a total £3.50 in Gately’s.”

Also worth a look for mattresses and bedsprings was Skelly’s on Wellington Quay. Slowey’s on Bachelor’s Walk towards O’Connell Street was home to items that “might need a bit of loving care and repairing, but this is not a problem; it is part of the enjoyment.” If it was old coins you were after, Kevin O’Kelly’s coin shop on Wellington Quay was the place.

For those searching for old pictures and books, George Popp by the Ha’penny Bridge was a good shout, despite it’s odd opening hours (between midday and two o’clock during the week, and 10 o’clock to midday on Saturdays.) “Beyond that Goyers is a cave of delights,” Gillespie wrote, “mostly jewellery - such as the beautiful amber heart on a chain in the window. But it also sells prints and assorted china, the prices are very reasonable.”

Matthew and Son was under the Merchant’s Arch, the shop James Joyce visited and wrote about in Portrait of an Artist. “Further down in Rusty Redmond’s Ye Olde Rusty Antiques, with a very mixed stock, from old flowered loos to writing boxes.”

Nearby, Matty Wals (24) ran The Ha’penny Steps shop with four friends. The shop had opened three months previously. “Much of his stock is unpolished brass, which he sends along to T. & J. Mitchells of Pembroke street to be professionally polished… For this reason, Ha’penny Steps is a bit classy for the junk bracket.”

On Charlemont Street, Gillespie introduced readers to Patrick Marr’s shop. “It is a small and self-effacing establishment of the sort whose owners sell junk to live rather than live to sell junk.” Outside the shop was a row of schoolroom desks, with benches and inkwells attached, and a Victorian dresser with a mirror. “Another shop in this category is Mrs Kelly’s of St Mary’s Abbey, off Capel street, where I found a solid drop-leaf deal table for 12s 6d and an extravagantly baroque mahogany sideboard for £10. It is a shame that these shops are being forced to disappear or go over to modern stock.”

Conway’s on Thomas Street got a mention for selling large pub mirrors, as did Sam’s Junk Shop on Francis Street - “Sam says the most valuable thing in the shop is himself” - and Serendipity bric-a-brac on the same street. Gillespie kept going; the Gramophone Stores near South William Street, Byrne’s of Essex Street which sold old sewing machines.

The following day, Gillespie returned to detail local markets; the Iveagh market, the Daisy market in the backstreets of Capel Street, Cumberland Street Market, the Dandelion Market, the Liberties Antique Market. “Plan to spend some time there sifting; but then the true junk lover knows that time is even more essential than money to successful junk hunts.”