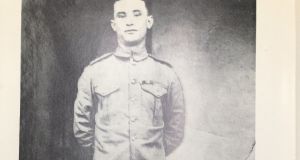 Pte James Joseph Daly of the Connaught rangers was executed on November 2nd, 1920, for leading an attack on the British garrison in Solon, India.

It all began with a hurling match in Clare and a calculated snub. Joe Hawes, a wiry, embittered veteran of the first World War, was home on embarkation leave from India in late 1919.

Hawes was proceeding on foot to a hurling match in his Connaught Rangers uniform when he was accosted outside an RIC barracks by a British officer who enquired as to where he was going as the match had been banned. Hawes was affronted.

Still seething, but with no other prospects, Hawes returned to India. Temperatures were rising in Wellington Barracks, Jalandhar, in the Punjab, on the night of June 27th, 1920. Summer was a purgatory in these parts and on these days the temperature was consistently higher than 40ºC. The men had just received their letters from home bringing news of the Black and Tans.

Hawes told his story about the GAA match. Others chimed in with their grievances. Hawes posited there was no moral difference between what they were doing in India and what the British were doing in Ireland. “What are we going to do about it?” What indeed?

Refuse to soldier for Britain

They resolved their protest would be a peaceful one. They would simply refuse to soldier for Britain.

Five men were initially involved in the mutiny. They were soon joined by 30 more.

The rebels hoisted a tricolour flag in the barracks made from materials bought in the local bazaar.

The mutiny spread to Solon, with tragic consequences, where another company of the Connaught Rangers was based.

Pte James Joseph Daly, from Tyrellspass, Co Westmeath, in Solon led a party of 70 men to the officers’ mess where he calmly informed the officer in charge, Capt Leslie Badham, that they would soldier no more until the British left Ireland.

The mutiny at Jalandhar resolved itself after detachments of the Seafort Highlanders and the South Wales Borderers surrounded the barracks and the mutineers were transferred to a makeshift internment camp.

By the time news of the end of the mutiny at Jalandhar had reached Solon, it had become distorted and rumours spread that the mutineers had been shot out of hand.

Fearing for his life and those of his comrades, Daly decided to organise a frontal attack on the garrison’s heavily protected magazine.

The attack was a tragic failure and privates Peter Sears from Co Mayo and Patrick Smythe from Co Louth were killed.

Retribution was fierce. Fourteen men, including Hawes and Daly, were sentenced to death and a further 47 received long prison sentences.

Only Daly was executed as he had led the attack on the magazine.

Daly’s execution on November 2nd, 1920, just a day after Kevin Barry’s, ensured his place in the pantheon of Irish martyrs.

As for the rest of the mutineers, they were transferred to prisons in England and eventually released in 1923. The Irish State stepped in to give the men pensions denied to them by the British government.

The bodies of Daly, Sears and Smythe were repatriated to Ireland in 1970 on the 50th anniversary of the mutiny.

The mutiny was a military failure but a moral victory.

The books quiz: Who adapted his own crime novel for a BBC TV series?
7