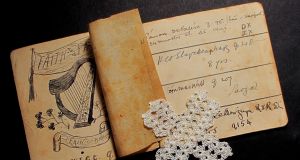 A prison diary owned by Éamon de Valera when he was jailed in England after the 1916 Rising has come to light and will be auctioned in Dublin next month.

A prison diary owned by Éamon de Valera when he was jailed in England after the 1916 Rising has come to light and will be auctioned in Dublin next month.

Whyte’s auctioneers said “a prison diary owned by Éamon de Valera – prisoner Q95 – during his imprisonment in Dartmoor, Maidstone and Lewes prisons in 1916-1917” has an estimated value of up to €5,000.

It is due to go under the hammer in an auction of historical memorabilia on March 13th.

Whyte’s said the diary, hitherto unknown, was a gift from de Valera to Michael Veale, a War of Independence veteran and “the present owner purchased it in 1971 from Veale’s widow, Kathleen Veale”.

The vendor has not been named.

After serving with the Boland’s Mill garrison during the Rising, de Valera was arrested and jailed at various locations in England.

He was released under a general amnesty in 1917.

Each of the 30 pages is ruled into four sections “where the name, address, prisoner number and sentence in years was filled out by each inmate, including de Valera himself”.”

In some cases, according to the auctioneers, de Valera has added a code such as “LX” or “DX”, which they say may be a personal code he devised based on Roman numerals.

Whyte’s said that among the entries was one on Eoin MacNeill, whom “de Valera insisted on being recognised and saluted as chief of staff of the Irish Republican Brotherhood while in prison, despite his attempts to prevent the Rising and the animosity [directed at MacNeill] by many prisoners”.

The diary contains a white crocheted cruciform bookmark reputedly sent to de Valera in prison by his mother.

Whyte’s said it would also auction a charcoal drawing of de Valera by Seán Keating in its art sale later this month.

The tricky art of carbon footprints
9

How do I get my child to read books with more words and fewer pictures?
10