New US president Joe Biden pleaded for unity in his inaugural address to a divided United States of America. "This is our historic moment of crisis and challenge," he said, shortly after being sworn in as the nation's 46th president. Video: C-Span 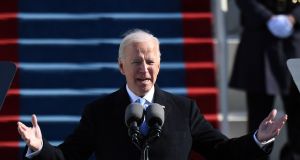 US President Joe Biden delivers his inauguration speech on January 20th 2021, at the US Capitol in Washington, DC. Photograph: Andrew Caballero-Reynolds/AFP via Getty Images

In his inaugural address, Joe Biden evoked great speeches by both Abraham Lincoln and Martin Luther King. No one is likely to place his own rhetoric in that class, either in the crafting of the language or in the power of the delivery.

But he did manage to achieve the big things he needed to do.

Biden’s basic task, to draw on the Seamus Heaney image he did not use this time, was to find a balance between hope and recent history. On the one hand, he had to make an appeal for unity and civility. On the other, he had to avoid mere blandness by acknowledging the brutal assault that American democracy has just endured.

He also had to find an appropriate tone in which to mourn the 400,000 dead of the pandemic in the US, while also creating a sense that the return of reason and science to the top table will mark the beginning of its end.

There was also a subtler calculation to be made. Biden’s instincts are deeply religious and he was clearly anxious to reclaim the imagery of faith from the Right. But he did not want to go so far with this that he alienated those who do not share it.

As a balancing act, Biden’s address can be judged by the way it managed to be honest enough to be recognisable as an account of where the United States stands yet sufficiently optimistic to suggest that it can move in a very different direction.

Ireland Says Yes: The Inside Story of How the Vote for Marriage Equality was Won – Book Review