You’ve Been Trumped Too review: and you thought you’d reached peak disgust... 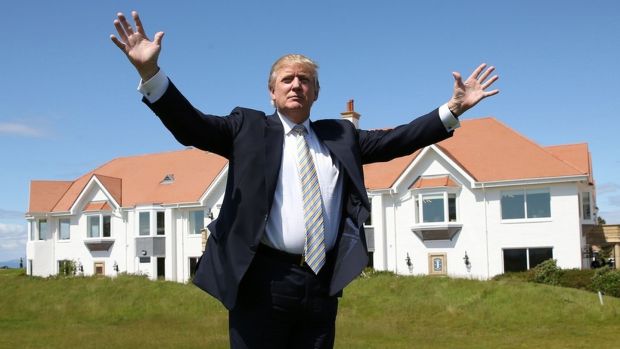 Film Title: You've Been Trumped Too

When two policemen arrived, late at night, at the door of her Aberdeenshire lighthouse, Rohan Beyts – a grey-haired, Croc-wearing, retired social worker – naturally assumed that something terrible had happened to one of her children. Instead, she faced – and this is the right word – a trumped-up charge of urinating on sand dunes. Aghast, she insists that she has never received so much as speeding ticket in her life.

Why would taxpayers’ money and, you know, real Scottish cops, be used to terrorise a former public servant, so?

It transpires that Rohan was audacious enough to march in support of her neighbours: the Forbes. That family were the heart of this film’s sickening 2012 predecessor, You’ve Been Trumped.

Molly Forbes, aged 92, is a former land girl who sang to her cows and “kept them bonny” during the second World War. Her son Michael and his wife Sheila now run the family farm which has been without water for some five years, a period which strangely coincides with their refusal to sell to facilitate the construction of Donald Trump’s luxury golf course on a beach in Balmedie, Aberdeenshire.

Just when you thought the US Presidential campaign could not get more risible, along comes Anthony Baxter’s documentary, forged very much in the mode of early Michael Moore. In this spirit, the director keeps asking “What about 92-year-old Molly’s Water?” at Trump’s largest events. Trump responds by granting him an interview, as does Trump Jr. Neither emerge well.

Watching the Forbes family – “little people” by Donald Trump Jr’s account – leave the UK for the first time to visit this year’s Republican National Congress would alone justify the price of admission.

“This is bloody ridiculous,” eye-rolls Sheila as she wanders through T-shirt stalls, parades and stand-offs between abortion activists of different stripes; her husband concurs: “Never heard so much bullshit in all my life.”

You’ve Been Trumped Too touches on many recent flashpoints: Melania Trump’s alleged speech plagiarism, Trump’s wavering on Detroit’s brown water crisis, and his characterisation of Mexicans as rapists. Aberdeen’s finest respond by greeting his next helicopter touchdown with all the Bandera de México they can find.

But there’s nothing as condemnatory in this stirring documentary as the Donald himself. There’s something about the unforgiving repulsion in his voice when he says: “I look at Mr Forbes and the disgusting conditions in which he lives.”

Disgusting in this context means he wears a jumper, keeps spare tractor parts around the farm, and there’s some rust on the corrugated rooves of his farm buildings. It’s enough to condemn practically every farmer in Ireland and Britain. Words like ‘pigsty’ are thrown around.

Mr Baxter is to be commended on shaping a film that starts out looking like a drop in the ocean – we’re quite sure cutting off the Forbes’ water is not Trump’s sole faux pas of late – and ends by making the viewer realise that this story is the only story.

The bullying and intimidation is appalling and something rather underestimated by the David-Goliath ratio. But what’s worse is a depiction of how a small nation will bend over and send in the troops to defend some flash billionaire or corporation on the promise of thousands of jobs that never come to pass. Remind you of anyone?

Most important film of the year.

- You’ve Been Trumped Too is at the QFT, Belfast, and is available to stream on the filmmaker’s Facebook page

Tina Turner: ‘I had a terrible life. I just kept going. You just keep going’