Why does Timothée Chalamet look as if he’s being buffeted on Lahinch beach?

And, more importantly, will we be able to watch him star in Dune from a cinema seat? 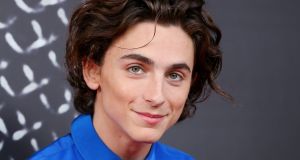 When Denis Villeneuve signed up for one of pop culture’s great white whale hunts, he can’t have imagined the project would take on an emblematic quality for the entire industry.

Yesterday Vanity Fair released the first still from the Canadian director’s attack on Frank Herbert’s Dune. It’s an odd image. Timothée Chalamet looks as if, while on a winter walk in Lahinch, he has become depressed at all the Dunnes Stores plastic bags buffeted in the wind. There’s no promise of Flash Gordon here. Further images followed of stars staring moodily at sand or brooding in space armour. The grand space opera is due for release on December 18th. Surely the film business will be functioning reasonably normally by then. This is a 2020 blockbuster that won’t get delayed. Right?

Well, the omens are mixed. The history of Dune on screen is an uneven one. Herbert’s sub-Arthurian epic was published in 1965 and, after winning both the Nebula and Hugo Awards – the twin Oscars of science fiction – went on to become the bestselling novel ever in the genre. Set largely on the planet Arrakis, it tells of young Paul Atreides’s efforts to negotiate the economic and political discontents of a society that hangs around the production of a powerful drug known as Spice. Herbert burnished the empire in five successive sequels.

Your first look at Timothée Chalamet in #Dune is here: https://t.co/VPrnJ6AGNd

Efforts to adapt the novel began in 1971 when the producer Arthur P Jacobs made an unlikely advance to David Lean. The director of Lawrence of Arabia turned down the project, and attention moved to heroes of the underground. Alejandro Jodorowsky, director of the great psychedelic western El Topo, worked on the adaptation for two and a half years, but, despite spending some $2 million in preproduction, managed only to create impressions of the greatest film never made. Salvador Dalí was to play the emperor. HR Giger (later to do such memorable work on Alien) signed up as designer. Karlheinz Stockhausen, Henry Cow and Pink Floyd discussed ideas for music. The excellent 2013 documentary Jodorowsky’s Dune explains how, as the script swelled to the size of a phone book, the production was eventually cancelled in 1976.

The charismatic Italian producer Dino De Laurentiis acquired the rights and, on the advice of his daughter, passed the project into the hands of David Lynch. The director of Eraserhead and The Elephant Man – as peculiar a choice as Jodorowsky – had not read the book and expressed no great interest in science fiction, but he threw himself into the project and, after a troubled production, delivered a distinctive film to a largely uninterested public in 1984.

Though not a complete box-office catastrophe, the picture lost money for De Laurentiis and set two generations of Lynch fans on a Quixotic quest to find virtue in an inherently compromised project. Sting wears a sort of nappy. Francesca Annis is rather good as Lady Jessica. The Lynch regulars Freddie Jones and Jack Nance have fun. The film is mostly notable for offering us the first collaboration between Lynch and his representative on Earth: Kyle MacLachlan’s performance as Atreides launched a singular talent for the millennial years.

The Lynch film at least stirs up strong emotions. Nobody was much bothered with the slavish TV adaptation that emerged in 2000. Featuring Alec Newman as Atreides, the series is little more than a mid-budget karaoke version of the sprawling text, but it attracted enough viewers on the Sci Fi Channel (now better known as Syfy) to generate a sequel in 2003. A rising James McAvoy played Atreides in Children of Dune. (You can have that for your Dune-trivia quiz.)

Riding the acclaim for Arrival and Sicario, Villeneuve was a popular choice to make one more tilt at the Dune windmill. Rough seas almost immediately intervened. The director’s Blade Runner 2049 received ecstatic reviews but struggled at the box office, losing Warner Bros about $80 million, or €73 million. The studio did not flinch. Chalamet was cast as Atreides. Rebecca Ferguson, Josh Brolin, Oscar Isaac, Javier Bardem and Charlotte Rampling flesh out a delicious cast. Having had a notable hit with a bifurcated take on Stephen King’s It, Warner is again splitting the adaptation into two parts. Dune fans will be happy that the screenplay is rumoured to stick closely to the source. Neutrals may worry that it is too faithful (a problem in the post-Potter era). But most film enthusiasts will be wishing the project well. We need an epic to close out a grim year. We would very much like to see it in a public space.