Vincent Cassel: ‘I really wanted to change the idea of cinema’ 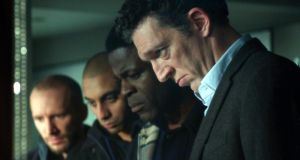 Actor, producer, and sometime dancer Vincent Cassel sits his distinctively slim frame down into a chair, producing a neat configuration of acute angles. At 46, he’s a little greyer than the charismatic tyke who shot to international prominence on the back of 1996’s La Haine . Otherwise, you couldn’t say he’s aged or changed in a way that most mortals might over 17 years.

Today, he’s stopped over in London on promotional duties for Trance, a new urban thriller from Oscar-winning director Danny Boyle. There’s a nice circularity about a Cassel and Boyle collaboration: Trainspotting , the Manchester-born film-maker’s breakthrough hit, was once marketed in France as “The British La Haine ”.

“I remember going to see the movie with that in mind,” recalls Cassel. “The ‘British La Haine ’? What do they mean by that? And they had some things in common I have to say. Ever since that I’ve always kept an eye on what Danny Boyle is doing.”

Cassel speaks perfect and neutrally accented English with some speed and no little precision. This is just one of the many languages the Parisian-born artist has mastered to date: his linguistic armoury also boasts French (naturellement ), Portuguese, Italian and the Russian he learned for David Cronenberg’s Eastern Promises .

“I don’t keep it up, honestly,” he says. “When I go to Russia, then after a few days I start to understand what is going on a little better. Otherwise it’s just something I learned for a movie.”

In common with Eastern Promises , Trance casts Cassel as a London-based criminal. He sinks effortlessly into the role and into the environment. It’s not just the language: he does seem like a natural cultural fit in a British setting in a way that most French actors wouldn’t.

“Well, I went to the Lycée Français here when I was younger and even before that I used to come over to buy records and things.”

He smiles: “And my wife has a house here in London and I like to see her sometimes.”

The wife is Monica Bellucci. Their nine-year union has produced two daughters and several onscreen couplings. Thus far, they’ve beautified L’Appartement, Irreversible, Sheitan, Agents Secrets , and Dobermann together. The last time I met with Cassel, there was talk of a Cassel-Bellucci romantic comedy. But that attractive notion has since fallen by the wayside.

So no known genre will suffice?

“Genre is only interesting when it’s in the hands of a real director and when it becomes a director’s movie. If you hear Jacques Audiard is doing film noir, you know he’s never going to do film noir. He’s going to take film noir and make it in to something else – something that’s a Jacques Audiard film.”

It’s probably no accident that the most charismatic French actor of his generation is also the trickiest to pigeonhole. Although his CV is lightly peppered with high-profile Anglophone roles – see Shrek, Derailed, Elizabeth, Oceans Twelve and Thirteen – Cassel is best known for his involvement in audacious, ground-breaking cinema.

“When a Danny Boyle or a Darren Aranofsky or a David Cronenberg calls me, it’s wonderful because these are the people exactly I want to work with,” says Cassel.

“If I kept saying ‘yes’ to bad-guy roles in Hollywood blockbusters, I guess those guys wouldn’t call. You have to trust what you like.”

Vincent Cassel was born into an acting family. His late father, Jean-Pierre Cassel, was a popular comic actor and dancer who trained alongside Gene Kelly.

“I grew up in boarding school a lot,” recalls the younger Cassel. “It was terrible actually. I hated it. And I would go home and see my father dancing in costumes. And he always seemed so happy at his job. I never saw my father depressed. I had a very happy idea of what it was to be an actor. That really made me want to be part of it.”

Still, having those industry connections was sometimes a mixed blessing.

“To grow up in that professional environment allowed me to understand a lot of things that I would have had to learn on the job,” he says. “I knew how the business worked. I knew how to interact with an agent. I knew how the process of making a movie worked because I’d seen my father on so many sets. And the idea of becoming an actor was something that was natural. That’s already a big step. That’s a lot. But then you worry about getting out from under the shadow of your family.”

As it happened, Cassel’s sensibilities ensured that he always stood out from the pack. An instrumental force in the so-called wave of New French Extremism, he starred in Gaspar Noé’s hugely controversial Irréversible and has produced (and appeared in) Kim Chapiron’s Sheitan and Romain Gavras’ Our Day Will Come .

“I’ve been pretty radical from the beginning,” says Cassel. “I never wanted to work with anybody of my father’s generation. I stayed focused on the people my own age coming up. I was a bit of a rebel. I really wanted to change the idea of cinema in France. In a very stupid way sometimes. Especially when I was younger. But it has worked really well for me.”

He’s not simply courting controversy. Cassel is genuinely passionate about his “difficult” films. He urges me to seek out 2010’s Our Day Will Come , a violent drama about separatist redheads who want to go to Ireland: “You have to check it out; it’s perfect for you.” He speaks about the raucous horror – if that is the right “genre” – of Sheitan – with affection and quite a bit of glee.

“In the particular case of Sheitan it is kind of a weird movie,” he says. “There’s a dog masturbating on screen. It’s not for everybody. And it’s hard to play on TV. But when I’m doing one of these films – Dobermann, Sheitan, Irréversible – I’m excited. I have this feeling that its not just part of the job. And I think people – as years pass – they know me for that. They know me for the weird films. They know that if they go to see a movie with me, then somehow it might just be different from a movie you would usually see.”

He smiles reassuringly: “It’s not about big box office. If you like to see different kinds of stuff stick with me.”

In person, it’s hard to work out how the charming, laid-back, very easygoing Vincent Cassel can summon the fury required for the Mesrine sequence or the six shades of crazy needed for Black Swan or A Dangerous Method .

“They say ‘cut’. I go home. That’s it,” he says. “I like to see myself as a very normal guy who doesn’t care and who takes things lightly. But then if you talk to Monica, she might be complaining that I’m bringing the work home. I’m not doing it on purpose. But I dream about what I do and the characters I play so that’s definitely proof that I must be taking it seriously and that it gets me at a pretty profound level.”

Dreaming, he says, has become part of his process because he falls asleep easily when he reads. He also likes to draw his characters and – falling back on his expertise in dance and Capoeira – to work out how they move.

“I don’t train in dancing anymore,” says the actor. “ But I realise that I have some physical consciousness carried over from it. I’m really interested – still nowadays – in movement. I really appreciate it as an actor as its one of those little things you twig here and there that really helps you to fill up the frame.”

His physicality as a performer is key to many of the charming villains he has essayed on screen. Is that charm always present – in embryonic form – on the page when he agrees to the role? Or is it a Cassel import?

“It really depends. In Trance , the character was already written like that. I just had to show up. When it’s not well written enough, you have to really work to make the character appealing for the audience. I dream. I wander about. I draw badly. And then I get to the set and it usually takes about a day for it to crystallise into something.”

He smiles: “And that’s always a very strange day.”

Love Island: It’s deranged. What am I actually watching?
4

Go to Auschwitz, buy a trinket: Howard Jacobson on how we treat the Holocaust
5

The movie quiz: What mighty age is Olivia De Havilland?
7