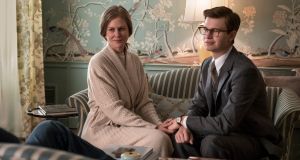 The Goldfinch. Nicole Kidman and Ansel Elgort in John Crowley’s film of the Donna Tartt novel

We mean no disrespect to John Crowley or Donna Tartt when we note that the former’s take on the latter’s bullet-stopping novel will, until at least its release in late September, be dogged with the words “awards bait”. That’s just how things are.

The Irish director’s Brooklyn scored three Oscar nominations. Tartt’s novel (though unevenly reviewed this side of the Atlantic) won the Pulitzer Prize and many devoted friends on its publication, in 2013.

Peter Straughan, who wrote the screenplay, got his own Oscar nomination for Tinker Tailor Soldier Spy. Few films have felt more awards-baity since the days of The French Lieutenant’s Woman.

The trailer looks pretty much as you’d expect it to look. That is neither a good thing nor a bad thing. Scored to Otherside by the mighty Perfume Genius, it includes references to an extraordinary number of incidents in a vast, sometimes disordered novel that will take some taming if it is to generate a feature film of tolerable length.

We see Oakes Fegley as Theo, the book’s protagonist, caught up in the bombing at the Metropolitan Museum that puts him in the way of the titular painting by Carel Fabritius. We see Nicole Kidman as the socialite mother who takes him in after the bombing. We see Jeffrey Wright as the antique restorer who later becomes Theo’s guardian and adviser.

There’s Ashleigh Cummings as the girl he will love. There’s Ansel Elgort as the older Theo. We even get a glimpse of the little dog that sticks with Theo through thick and thin.

In the internet age, readers are more obsessed than ever with ensuring that a novel be rendered “faithfully”, and they now get to nag the film-makers if any alteration is dared.

Whatever becomes of Crowley’s movie, the trailer has been constructed to put such minds at rest (for now). It even begins with a slightly altered version of the first line in the book: “In Amsterdam I dreamt I saw my mother again.”

Every scene in the promo corresponds to a sequence in Tartt’s rambling, sub-Dickensian epic.

Straughan will, however, have to do some sort of trimming. It’s a very different job from the one he took on in Tinker Tailor. In that case he and his late wife, Bridget O’Connor, had to re-engineer a Swiss watch into a less complex mechanism. Here the exercise will be more akin to hacking back the foliage in a beautiful, rampant shrub.

The trailer promises technical excellence. Roger Deakins’s cinematography is woody and exquisite in the style of (appropriately) the Delft school. The cast all look lovelier than a room of Rembrandts. Expectations remain high.

The Goldfinch opens here on September 27th. We’re betting its world premiere will come a few weeks before that, at the Venice or Toronto film festivals.

Pierce Brosnan: ‘I was an only child from a fractured family’
10

Up on a pedestal: Repurposing plinths as public art space
Real news has value SUBSCRIBE