Tom at the Farm/Tom à la Ferme review: a work of genius

This isn’t a work of narcissism. It’s a work of genius. See it and try getting it out of your head. Just try.

Tom at the Farm Movie - trailer 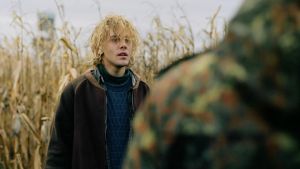 Film Title: Tom at the Farm

Straw-haired and distraught, Montrealer Tom (Xavier Dolan) travels out to the sticks for the funeral of his former lover, Guillaume. He is greeted by Guillaume’s mother (Lise Roy), who clearly has no idea that her son was gay. Guillaume’s menacing surviving brother Francis (Pierre-Yves Cardinal) confirms as much, and Tom finds himself spinning a web of elaborate fiction to protect the grieving matriarch.

Tom attempts to leave the family dairy farm after the funeral, but struggling with some perverse variant of Stockholm Syndrome, he returns to Francis, a man who is capable of chasing our titular hero through fields of razor sharp corn ears. And, we will learn, probably much worse.

Is Francis a genuine homophobe, a self-loathing closeted gay, or a common-garden psychopath? The arrival of Guillaume’s fake girfriend may well decide the matter.

The dazzlingly talented Xavier Dolan first came to prominence five years ago at the age of 20, when I Killed My Mother, his debut feature, won three prizes and an eight-minute standing ovation at Cannes. His subsequent work, in particular the sublime and underrated Laurence Anyways, has confirmed the Québécois as a major player in world cinema.

Dolan’s critics seldom dispute his deft skills as a film-maker, although they have whined about the close-ups of his own performance. His critics are plain wrong.

Dolan’s cowering, magnified central turn ensures that his fourth feature keeps us guessing and dreading. As ever, the young auteur’s interest in sexual and personal politics results in impactful and complex cinema.

This isn’t a work of narcissism. It’s a work of genius. See it and try getting it out of your head. Just try.