The Promise review: Intimate complications amid the horrors of genocide 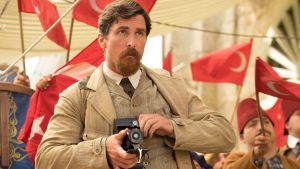 Christian Bale in The Promise

Not too far into the 20th century, small-town Armenian apothecary Mikael (Oscar Isaac) agrees to marry a beautiful local girl and uses the dowry to travel to Constantinople to study medicine. Once there, he befriends Emre (Marwan Kenzari, Ben Hur), the son of a high-ranking Turkish official, and Ana (Charlotte Le Bon), an Armenian ballerina raised in Paris.

Ana is romantically involved with Chris Myers (Christian Bale), a fiercely determined American reporter for the Associated Press, a detail that does not prevent Mikael from falling head over heels for her.

These intimate complications are brutally disrupted by the outbreak of the first World War.

Mikael avoids conscription into the Ottoman army but, when he attempts to defend his uncle from imprisonment during the round-ups of April 24th, 1915, he is detained and sent to a labour camp himself. The life there is merciless but there are even worse things happening to the Armenians elsewhere.

Terry George is accustomed to shining a light on darkest history. The Oscar-winning writer-director has previously tackled such unlikely movie subjects as the 1981 IRA hunger strikes (Some Mother’s Son) and the 1994 Rwandan genocide (Hotel Rwanda). Here the Irish film-maker takes on the Armenian genocide that began in 1915 and ended after the Ottoman government’s systematic extermination of 1.5 million Armenians. It’s a worthy subject and one that has been unfairly forgotten: Hitler, when justifying his own genocide, asked “Who, after all, speaks today of the annihilation of the Armenians?”

The Promise was bankrolled by the late Armenian philanthropist Kirk Kerkorian, and is not short on star wattage. In addition to the big guns of Batman (Bale) and Star Wars (Isacc), well-known folks such as Jean Reno and James Cromwell make pop-up appearances. It’s a glossy package. Sometimes too glossy: Javier Aguirresarobe’s cinematography is positively dripping and Gabriel Yared’s score doesn’t let up for a second.

As one might expect, the horrors and the normalisation of same are deftly handled, even when the dialogue is overloaded with historical and political details.

Sadly, the love triangle is rather less successful. There is, ironically, far more sexual chemistry between Mikael and the finance-he-left-behind (Angela Sarafyan, Westworld) than there is between Mikael and Ana. Le Bon’s Ana is pretty and nice and good-hearted, attributes that leave her dangerously underqualified to be a home-wrecking heartbreaker.