The Other Side of Hope: a Finnish refugee crisis of conscience

Finnish auteur Aki Kaurismäki’s film is filled with curious oddballs, but there are also many ethical connundrums to contend with 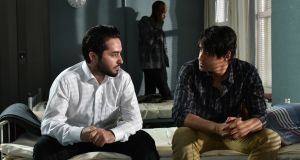 It’s not entirely accurate to say that there is nothing quite like an Aki Kaurismäki film. The languid pacing and deadbeat deadpan that defines the Finnish’s auteur’s milieu is not entirely dissimilar to Jim Jarmusch’s hip, still-to-be-gentrified corner of the space-time continuum. The oddballs with odd vocal patterns who inhabit the Kaurismäkiverse could equally, one feels, be persuaded to settle down in David Lynch’s Twin Peaks. Yet unlike these close-enough US equivalents, there’s a social, political and ethical engagement underpinning such Kaurismäki favourites as The Match Factory Girl, The Man Without a Past, and, well d’uh, Crime and Punishment.

Following on from 2011’s Le Havre, in which an elderly shoe-shine merchant harboured a young African migrant, the second instalment of a proposed port city trilogy follows the migrant trail to Helsinki. Or rather the director’s Helsinki, a city defined by candy-coloured formica, old rock’n’rollers, and fish. In a knockout opening gambit, Khaled (Sherwan Haji), a stowaway Syrian asylum seeker, emerges from the black cargo of a coal freighter. How did he get that far from Aleppo, the authorities later enquire: “Nobody wants to see me,” he says flatly

1 One hundred Irish retailers for all your online Christmas shopping
2 Travellers call on comedian Des Bishop to apologise for ‘absolutely appalling’ comments
3 Government fears Nphet will seek new lockdown after Christmas break
4 New Zealand records 25 Covid cases as foreign fishing crews arrive
5 Michael McDowell: What exactly is the price of accepting this Nphet advice?
6 ‘Groundbreaking’ direct provision replacement forecast to save millions
7 How long can Government afford to keep State pension age at 66?
8 Covid-19: Backlog forces HSE to skip calls to thousands of close contacts
9 Kathy Sheridan: Now is the time for humility, not cynicism
10 Golf in Level 5 Covid restrictions: Clubs still waiting to hear if they can remain open
11 Coronavirus: GPs voice concern over contact tracing ‘confusion’
12 Life under Level 5: What will the next six weeks look like for the State?
13 ‘My sister preys on people’s weaknesses, and causes nothing but trouble’
14 Suzanne Lynch’s US Election Diary: Trump ‘walks out’ of TV interview at White House
15 School ordered to reopen after closing due to Covid-19 fears
16 ‘I’m trying to find where I fit here in Ireland’
17 Support bubbles: Everything you need to know
18 Six Nations - Ireland v Italy: Kick-off time, TV details, team news, standings and more
19 People who throw house parties can be fined €1,000 and jailed for up to a month under planned law
20 Covid-19: State moves to Level 5 for six weeks with hopes of ‘meaningful’ Christmas celebrations
21 Hugo Keenan could start in changed Ireland team against Italy
22 Schools should not reopen after midterm unless safety improves, say unions
23 Brexit: UK government suffers heavy defeat over ‘law-breaking’ Bill in House of Lords
24 Michael Harding: The tree that broke my heart will be born again
25 Covid-19: Six weeks of lockdown hardship offers little by way of end reward
26 An Post letter business collapsing under Covid-19 - CWU
27 Kim Kardashian West at 40: How the queen of social media changed the world
28 Much of what we think about Covid-19 is wrong. We need to change the conversation
29 Miriam Lord: Dáil reeks of alcohol but Irish politics will not be sanitised
30 Removing Catholic symbols and practices from State schools no easy task
31 Gordon D’Arcy: Ireland don’t need to do a Finn Russell on it
32 Six weeks of Level 5: Non-essential shops to close, no visitors to homes and a 5km travel limit
33 'It’s his dishonesty, lack of character, his deceit' - ex-CIA chief excoriates Trump
34 Covid-19 public spending unsustainable without vaccine – Donohoe
35 Oaktree joins forces with Johnny Ronan on Irish Glass Bottle site
36 Bruce Springsteen quiz: How well do you know The Boss?
37 Who will win the International Dublin Literary Award 2020
38 Man United’s latest Parisian party more impressive than heist of 2019
39 Brexit: Michel Barnier urges talks, saying deal ‘within reach’
40 Covid-19 Explainer: Why is the contact tracing system getting swamped?
Real news has value SUBSCRIBE