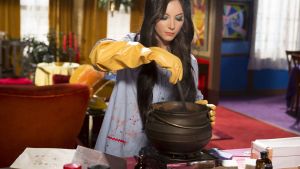 Barbara Steele how are ya: Samantha Robinson in The Love Witch

Anna Biller’s delicious, egg-headed second feature has already triggered an enviable sort of controversy. There have been a few negative notices. But, for the most part, critics have argued over the right reasons to like it.

Detailing the adventures of a glamorous young witch who, recently arrived in a pretty Californian town, lures various handsome men towards their doom, The Love Witch is an intoxicating riot of bold colours, eccentric acting and loaded feminist dialogue. Biller writes, edits directs and composes smashing music (some of which suggests the Incredible String Band not on drugs).

Looked at from one angle, the film comes across as a vigorous celebration of popular cinema and TV from the 1960s and early 1970s. You might sense brash shades of Italian horror in the glorious 35mm photography. The sub-wiccan rituals suggest – rather delightfully – a feminist subversion of Denis Wheatley’s reactionary occultism. I enjoyed imagining each death as the opening 15 minutes of an unhinged Columbo episode. (In the second half of which, Columbo would shyly borrow mystical tomes from the murderer.)

Biller isn’t having it. “I’m still surprised when people talk about Love Witch as being campy or pastiche,” she told this paper. The film-maker argues that she simply set out to make a film “using classic lighting and design techniques”. As nobody much takes that approach any more, “it came out like a 1960s movie”.

All of which should confirm that The Love Witch is worthy of furrowed study. The opening sequence finds Elaine (Samantha Robinson), long dark hair in the style of Barbara Steele, driving towards a quaint Gothic building. Her shoes are red. Her case is red. Her big car is red. When a contemporary BMW pulls up behind her, it comes as a shock. Like the recent horror It Follows, The Love Witch takes place then, now and no time.

Similar delightful rug-pulling happens throughout. Elaine sometimes speaks like an indoctrinated drone. “You sound as if you’ve been brainwashed by the patriarchy,” a pal actually says. Elsewhere she behaves like a Dworkinite avenger. That inner confusion adds resonance to film that is more serious than its surface suggests.

The Love Witch maybe reeks a little too strongly of the senior common room. Retarded by dialogue that never, ever overlaps, it goes on a tad longer than is strictly necessary. But this is a side-swiping original that deserves its inevitable cult status.