The King: Timothée Chalamet stars in a hunk of medieval hokum

Review: Not since Monty Python has a period Frenchman been as absurd as Robert Pattinson 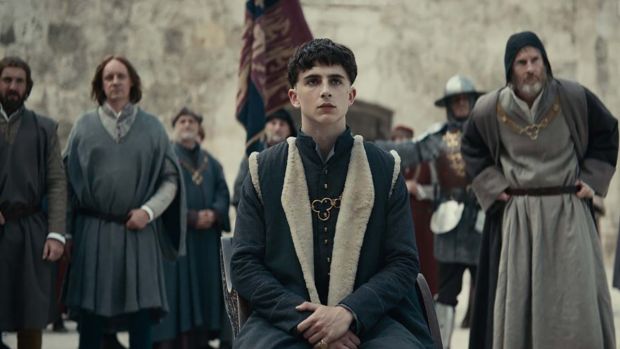 Timothée Chalamet in The King

The last thing any critic should do is berate a director for not making the movie he or she most wanted to see. With apologies, I will, nonetheless, express some regret that David Michôd chose to drop (or not consider) Shakespeare’s language when treating the rise of the second Lancastrian monarch.

The King is “based on” Henry IV Parts One and Two and on Henry V, but characters speak in a flat – not unconvincing – blend of theme-park yeoman-chatter and contemporary patois. It would have been fun to set Timothée Chalamet’s Saint Crispin’s Day Speech beside those of Branagh and Olivier, but we must settle for the perfectly solid prose concocted by Michôd and Joel Edgerton.

It is some measure of the filmmakers’ achievement that – despite an unsatisfactory performance from Chalamet – that settling requires no enormous effort. The King is a satisfactory hunk of late medieval hokum covered in enough filth to distinguish it from Sunday-night telly, but not so much that it ceases to be fun.

Chalamet isn’t bad exactly. But he is a bit too lacquered to convince as either the farting drunk of Henry IV or the eloquent brawler of Henry V. It doesn’t help that his fiercest battle is with an accent that veers from Bertie Wooster to Michael Caine to Brooklyn cheesemonger.

Fortunately, the entertainment around him works nicely. Edgerton is, for those raised on Orson Welles in Chimes at Midnight, an unlikely Falstaff – fitter, less dozy – but The King is offering us a different take on the character. Far from knowing him not (old man) after the coronation, Hal invites the old warrior back to provide advice in the war against the French. Falstaff’s strategies, explained lucidly, deliver a clarity to the Agincourt sequences that no historical film has previously managed.

There is no great psychological depth here. Featuring an excellent, brooding score by Nicholas Britell – who has done such good work for Barry Jenkins – the picture is more interested in mood than nuances of character. It does, however, allow Robert Pattinson some moments of outrageous glory as the pretentious, precious Dauphin. No period Frenchman has been quite so absurd since the soldiers yelling insults at the Brits in Monty Python and the Holy Grail. At such moments one is reminded that, as Brexit stews, few British filmmakers would dare stage something so broadly patriotic. Do Michôd and Edgerton, Australians both, understand what forces they’re playing with here?

Remember the Dominic West-Lily James kiss shock? The show they were making is a shocker too