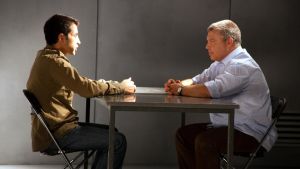 Nadav Schirman, a young Israeli film-maker, has gotten hold of an extraordinary espionage story and – how could he not? – turned it into an undeniably gripping documentary

Nadav Schirman, a young Israeli film-maker, has gotten hold of an extraordinary espionage story and – how could he not? – turned it into an undeniably gripping documentary. Enthusiasts for the work of John le Carré will be interested to learn that all the “tradecraft” stuff really does apply in the field. Personal and political tensions are on display throughout.

Nonetheless, The Green Prince does not make the most of this extraordinary material. There are too many repetitive visual clichés. The talking heads dominate a little too much. The film’s biggest question is never properly answered. Here is a film that had greatness within its grasp and let it slip away.

The Green Prince tells the extraordinary story of Mosab Hassan Yousef, a Palestinian recruited as a spy by Shin Bet, Israel’s internal secret service, in the late 1990s. Yousef fed the Israelis information as the conflict altered in character and ferocity. In order to conceal his complicity, Shin Bet had to attack his family home and send him back to prison. When he eventually decided to call a halt, the agency proved singularly unhelpful in clarifying his involvement to foreign powers.

All this would be extraordinary enough if Mosab were the son of an ordinary baker or an unremarkable doctor. But, as we learn earlier on, his father was Hassan Yousef, a key founder of Hamas. It’s hard to imagine a greater intelligence coup.

So, why did Mosab do it? The film never really comes up with a satisfactory answer. He talks about witnessing torture by Hamas operatives. He is appalled by the increasing number of suicide bombings. But, whereas this might explain a withdrawal from the movement, it doesn’t quite tell us why he made the dramatic step of advancing towards the other side.

Mosab should be a fascinating character, but there is an evasiveness to the man – who now looks younger and fresher than he did 20 years ago – that, though useful for a spy, stands in the way of our understanding his motivations.

Early on, Gonen ben Yitzhak, the agent’s handler in Shin Bet, talks about his charge’s unwillingness to play the committed Muslim. He won’t wear the right clothes. He beefs up at the gym. When ben Yitzhak talks about wanting Mosab to avoid behaving too much like “James Bond”, we get a sense that ego might be at the heart of his defection. The notion is, however, left hanging and his character receives little further prodding.

The relationship between Mosab and ben Yitzhak forms the film’s spine. Though many years have passed and many traumas have been endured, the two men tell much the same stories throughout. The technicalities of the operation are fascinating, but it is only in the picture’s last few moments, when Shin Bet looks set to hang Mosab out to dry, that we get any sense of an emotional connection.

The Green Prince intercuts interviews with some passable recreations, better archival footage and repeated, hackneyed shots of crosshairs closing in on buildings shot in mock night-vision. The apparent urge for political neutrality will almost certainly annoy activists on both sides.

Yet these flaws never seriously handicap a story that is constantly revealing unlikely swerves and remarkable angles. The lack of psychological insight is more than compensated for by a wealth of bizarre detail as to how such an extraordinary operation was maintained.

Did you know the security boffins can build a replica table in a day and outfit it with invisible listening equipment? You do now.

A Beautiful Day in the Neighborhood: A tremendous film, a great young director
3

Dr James Barry: the Irishwoman who fooled the British Empire
6

Are the political parties tuned in to the needs of musicians?
10

The power of the pre-order
Real news has value SUBSCRIBE