The Day Shall Come: Chris Morris’s film may be the year’s biggest disappointment to date

Review: Morris has turned fascinating stories into the first out-and-out dud of his career 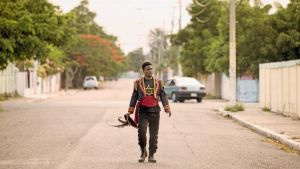 Marchánt Davis in The Day Shall Come

Film Title: The Day Shall Come

That noise you hear may be mystique hissing from the venerable Chris Morris Project. To this point, Morris, co-creator of The Day Today, prime mover of Brasseye, has been cautious about giving too much of himself to interviewers, but he has been on every other news bulletin explaining the premise of his second feature film.

“Based on a hundred true stories,” The Day Shall Come touches on efforts by the FBI to encourage harmless oddballs towards acts of terrorism that the agency could then bravely thwart. The projects took the art of entrapment to hitherto unimagined heights. Few fantasy novelists have worked so hard to create alternative universes.

You know what they say about the relative strangeness of fact and fiction. Morris, who co-authored the screenplay with Jesse Armstrong, has transformed these fascinating yarns into the first out-and-out dud of his career.

The best satire teases and heightens the absurdities of real life. The current project buries the reality in such fuss and mess that it becomes an irrelevance

There were a few clanks and some over-extended routines in Four Lions, Morris’s first feature, but that 2010 film’s singularity of purpose kicked aside most reasonable objections. It knew where it was going. Clocking in at a suspiciously short 87 minutes (not that one would want it much longer), The Day Shall Come, which began shooting over two years ago, feels like a salvage job on a smart notion that curdled in the execution.

It helps not a jot that much of the action suggests a ramshackle version of Four Lions. That film concerned bumbling terrorists. The current project concerns bumbling fake terrorists. Morris and his team could at least have made a different sort of bad film.

Anyway, The Day Shall Come does boast some brave, committed performances. The largely unknown Marchánt Davis is excellent as Moses Al Shabazz, leader of a bonkers – but largely benign – religious commune in an impoverished section of Miami. Merrily titled The Star of Six, the cult shares its devotions among Allah, a “black Santa” and Haitian revolutionary François-Dominique Toussaint L’Ouverture (weirdly little effort is made to conceal the fact that much of the Florida action is shot next door to Haiti in the Dominican Republic).

Somehow or other, Kendra Glack (Anna Kendrick), an FBI operative, happens upon one of Moses’s speeches and decides to nudge the cult towards an outrageous terrorist conspiracy. This involves interactions with a fake sheikh, flogging ersatz nukes to Nazi bikers and apparently divine messages from angry weather systems.

Orange is the New Black graduate Danielle Brooks deserves much praise for making something fleshy of Moses’s long-suffering, less befuddled wife. There is real pathos in their struggles with sanity and neoliberal economics. Indeed, Brooks and Davis are so good one yearns for them to escape the chaos and settle down in a nice quiet sitcom.

The best satire teases and heightens the absurdities of real life. The current project buries the reality in such fuss and mess that it becomes an irrelevance. The film does not regain its bite until, with accompanying snaps, the closing credits lay out the awful injustices visited on largely innocent citizens. It might work better if the FBI schemes were better known, but here the historical absurdities feel indistinguishable from Morris’s fevered inventions.

The complications that spin out around Moses are too random to bother entangling. It’s as if James Ellroy had been taking dictation from the Banana Splits. Worse still are the embarrassingly off-the-peg Ianuccisms that characterise the FBI interactions.

Armando Iannucci and Chris Morris have, of course, been fecund collaborators for decades and Morris’s influence runs through his friend’s The Thick of It and Veep, but, in this instance, the baroque profanity plays like a desperate effort to force energy into an imminent corpse.

What we need now: A primer in an all-consuming and fast-moving crisis
6

‘After Blackadder, for the first time in my life it was dead easy to get in the door’
8