The Curious Works of Roger Doyle: A quiet giant of Irish music

Review: This film functions as an alternative history of Ireland in the post-1960s confusion 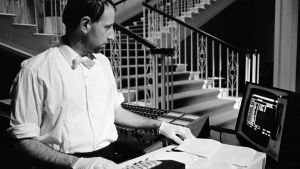 Early on in this documentary, Roger Doyle, one of the quiet giants of Irish music, discusses a formative encounter with Ken Russell’s film on Debussy. Anyone expecting echoes of that British director’s radical style will be set for a disappointment. Brian Lally’s efficient, informative film plays it by the numbers.

There are a few missteps. A visit to Debussy’s grave kicks up unavoidable reminders of Spinal Tap checking out Elvis’s last resting place (“too much f**king perspective”). Lengthy shots of Doyle’s opera Heresy, filmed during a live performance at Project Arts Centre, do that production no great favours. But this remains a worthwhile investigation of an undervalued talent.

Born in Malahide, Doyle studied composing at the Royal Irish Academy of Music, before going on to electronic experiments at the Institute of Sonology in The Hague. He has composed in all forms and in all spaces, but it his work for theatre and film that brought the most attention (though still not quite enough).

The Curious Works of Roger Doyle functions as an alternative history of Ireland in the post-1960s confusion. Olwen Fouéré is here to talk us through their angular, abstract collaborations for the Operating Theatre company.

Cathal Black – an Irish filmmaker when Irish films were as rare as Irish space shuttles – pops up to remind us that Doyle composed the eerie incidental music for his influential Pigs. One of the most diverting sequences finds Doyle playing a solo piano piece composed to echo a poetic, rambling answer-machine message from the late journalist Jonathan Philbin Bowman.

Ending with the successful staging of Heresy, based on the life of cosmological martyr Giordano Bruno, the film reminds us how Doyle skirts the territory between the ambient and the avant garde.

He doesn’t deal in the obvious, but the music (to paraphrase Anthony Powell on the fictional Hugh Moreland) rarely suggests owls quarrelling in a bicycle factory either. The composer comes across as no sort of maniac. Speaking calmly in measured tones, he could pass for a caring ophthalmologist or a responsible chartered accountant.

Why should he be anything else? The work speaks eloquently for itself. Others speak as well, mind you. It’s a pleasure to catch a glimpse of Bob Quinn, a founding father of Irish film, and to hear him complain about a review in The Irish Times from some 40-odd years ago. The ravens are still in the tower.

Are we ready for Martin McDonagh’s satirical look at sectarian violence?
9