The County: A spiky, lopsided Icelandic hymn to individualism 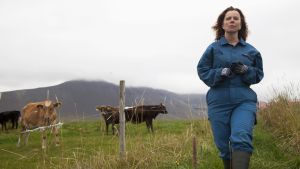 After her husband’s suicide, Icelandic dairy farmer Inga (Arndís Hrönn Egilsdóttir) discovers that he had been secretly working for the local co-operative as an informant against those farmers who broke rank to sneak off to purchase goods elsewhere. Now struggling with bills and workload, Inga, who was hoping to sell the farm, becomes increasingly resentful of community arrangements.

Indignant and furious, she mounts a one-woman campaign against the co-op’s monopoly and, in particular, co-op head Eyjólfur (Sigurður Sigurjónsson). Her efforts start out as late-night scrawls on Facebook and steadily escalate into a national news story. And beyond.

There is some noticeable overlap between Inga and the dogged eco-terrorist heroine of last year’s Icelandic hit Woman at War. That film’s environmentalism, however, was a comparatively easy sell.

There’s an uncomfortable Randian dimension to the protagonist of Grímur Hákonarson’s follow-up to the marvellous Cannes prizewinner Rams. The right to trash community agreements and buy from Amazon is not the most popular hill to choose to die on, even when this spiky, lopsided hymn to individualism is punctuated by crowd-pleasing mischief.

Against the antics, and for all the grit and purpose in Egilsdóttir’s central performance, the latent objectivism of the project recalls the rather sinister mannerisms and red scare New Deal bashing of The Fountainhead (1949).

Still, Icelandic cinema is seldom short of fire and ice, and cinematographer Mart Taniel’s vistas are as breathtaking as they are remote.

Available to stream on Curzon Home Cinema from May 22nd