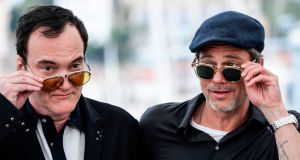 Director Quentin Tarantino and actor Brad Pitt pose during a photocall for the film Once Upon a Time in . . . Hollywood, at the Cannes Film Festival on Wednesday. Photograph: Christophe Simon/AFP/Getty Images

“Have you had a good Cannes?”

That question is being asked in every queue and on every escalator. The answer depends on which average you’re using.

The mode has been as high as ever. That’s to say films in the main competition have consistently hit a high standard. Quentin Tarantino’s Once Upon a Time in . . . Hollywood found the Cannes regular playing sound variations on his familiar themes. Ken Loach’s Sorry We Missed You – another social realist study from the festival’s most frequent visitor – also found an established auteur playing to his own, very different strengths. The mean average may, however, be a little lower than in the greatest years. Fewer instant classics have knocked the ball out of the park.

Pedro Almodóvar’s Pain and Glory is almost in that category. Highly autobiographical, the picture follows an ageing film director as he recalls his childhood growing up in rural poverty. Antonio Banderas has never been better as the Pedro stand-in: broken, hurting, struggling for rebirth. Penélope Cruz, playing his mother in flashback, creates a lost idyll just by being there.

The competition film that really stands out as a masterpiece for the ages is, however, Bong Joon-ho’s Parasite. The Korean director of The Host, Mother and Snowpiercer long ago established himself as an artist of extraordinary versatility. But Parasite still comes as a surprise. The film plays like a breakneck, surreal farce that, as disaster looms in later stages, develops a bracing anger at the social divisions in Korean society. A family of ingenious con artists conspire to get the servants of a wealthy couple sacked and to take their jobs. The carefully wrought scheme – cut to the rhythms of Jung Jae-il’s pounding score – was so impressive that applause broke out in the press screening at its consummation. Bong has put the hours in at Cannes over the years, but no comedy has won the Palme d’Or in many decades.

By one stretchy definition, the last yuck-fest to manage the feat was Pulp Fiction a quarter of a century ago. Once Upon a Time in . . . Hollywood (almost nobody was using the ellipsis before Cannes) debuted 25 years to the day after that Palme d’Or winner premiered on La Croisette. There are reasons to be critical of Tarantino. He has apologised heartily and has had those apologies accepted, but, in the era of #MeToo, many were still uneasy about this director, accused of mistreating Uma Thurman on the set of Kill Bill, shooting a film in the penumbra of the Sharon Tate murders. There is, however, no denying the fact that the premiere was – in an era where the autumnal awards season increasingly dominates – the sort of event that Cannes needs. The buzz outside the auditorium, where queues twisted for hundreds of metres, was overpowering and the film did deliver. It exhibits all of Tarantino’s flaws: absurdly indulgent parodies of contemporaneous pop culture. It also reminded us how he acquired his status: a persuasive languor accommodates an elegy for the LA of his childhood. Nothing sells the festival better than the presence of Brad Pitt and Leonardo DiCaprio on the red carpet.

Some purists would argue that this is not really what Cannes is for. It is, they’d say, intended for more outré cinema that requires a leg up. In truth, Cannes has to be for both commercial and cultural cinema. The arrival of Rocketman in the first week was very much in keeping with a taste for flash that has been here since the festival began. “Cannes has gotten more staid and a little less vulgar,” Jim Jarmusch told me. “I remember being in Cannes in the 1980s, and I’d see some magnificent Romanian film and I’d come out into the sun and there’d be a naked girl descending on a parachute into a circle of paparazzi.”

Cannes is also about honouring the established auteurs. By golly, they did that this year

Elton John didn’t do that (though I wouldn’t put it past him), but his presence a week before the Tarantino circus helped confirm Cannes’s status as a news and gossip hub. It helped that the Elton biopic was pretty darned good.

Cannes is also about honouring the established auteurs. By golly, they did that this year. A quarter of the directors who competed for the Palme d’Or were in the main race 10 years ago: Ken Loach, Quentin Tarantino, Pedro Almodóvar, Marco Bellocchio and Elia Suleiman. Gaspar Noé and Xavier Dolan also had films in various bits of the festival in both years. We note again that none of these people are women and that only three female directors competed for the Palme d’Or this year.

Younger voices and female voices are being heard. The most talked about – and arguably best – film in any of the high-profile races was from thirtysomething Robert Eggers. The Brooklyn-based director’s The Lighthouse, playing in Directors’ Fortnight, starred Robert Pattinson and Willem Dafoe in the tale of two lighthouse-keepers going bonkers as torrents rage and sea creatures threaten. Almost certainly the only film ever to combine the aesthetics of Captain Birdseye and Bela Tarr’s The Turin Horse, Eggers’s follow up to The Witch was shot in monochrome on vintage equipment. A bewitching, disturbing virtual two-hander, it had become such a sensation in the 12 hours since its morning screening that hundreds were turned away from the evening outing. Nobody is quite sure why it wasn’t in the official selection. Maybe the distributors wanted to be in the funkier sidebar that launched Mean Streets, THX 1138 and Jeanne Dielman, 23, Quai du Commerce, 1080 Bruxelles. At any rate, the furore confirmed Pattinson – a frequent visitor – in the top rank of Cannes royalty.

Lorcan Finnegan, a youngish Irish director, also made good use of his time in the Cannes limelight. Vivarium, his second horror film, was the first Irish release to play at Critics’ Choice since Peter Lennon’s Rocky Road to Dublin in 1968, and it went down a storm. Featuring Jesse Eisenberg and Imogen Poots as a couple stuck in a nightmarishly bland housing estate, the picture got raves from the Hollywood Reporter and Screen International. It seems certain to sell in all territories the producers desire. The influential Guy Lodge, who writes for the Guardian and Variety, called it “an optimum Critics’ Week discovery: a poisonously funny, incrementally terrifying suburban hellscape, seemingly art-directed by Magritte, Gregory Crewdson and Casa Zeta-Jones.”

Vivarium’s triumph was confirmed when it won the Gan Foundation Award for Distribution as part of Critics’ Week. The prize helps secure distribution in France.

As for female directors, Mati Diop, the first black woman to figure in the main competition, got strong reviews for her spooky maritime tale Atlantics. Better still – though more divisive – was Jessica Hausner’s unsettling bio-horror Little Joe. Critics either loved or hated the clean art design and deadened, alienating dialogue. The Irish Times was fully on board.

It’s always a mug’s game trying to predict the Palme, but Almodóvar is slightly ahead with most tipsters

At time of writing, however, the person most likely to become only the second woman director to win a Palme d’Or is Céline Sciamma. The French director’s Portrait of a Lady on Fire is a cool, intellectually rigorous same-sex romance between a painter and noblewoman in 19th-century France. The French critics in particular have gone bonkers for it.

It’s always a mug’s game trying to predict the Palme, but Almodóvar is slightly ahead with most tipsters. Amazingly, he has never won at Cannes, Berlin or Venice. Could Alejandro González Iñárritu’s jury give Loach a record third? Unlikely. Could they get over their comedy-phobia and hand it to Bong? He deserves it, but since when has that mattered?