Superfly: A cliche of strippers, cocaine and one-last-job crime

Review: The clothes are great, the fights well staged, but it doesn’t add up to a movie 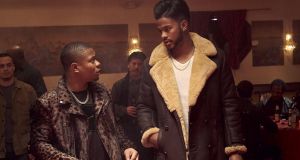 Production began on this slick remake of the 1972 blaxploitation standard as recently as December. The speedy turnaround has not, alas, made for an energised movie. Director X, the Canadian music video director who has previously collaborated with Rihanna, Drake and Nicki Minaj, sure knows how to stage a snazzy tableaux. But between the spectacle – strippers, threesomes, dollars raining down, the usual – there’s a lethargic drama concerning Youngblood Priest (Trevor Jackson), his two lovers and their cocaine operation.

Youngblood wants to get out of the drug peddling business and in order to do so, he must – ta dah – sell even more drugs. His mentor and supplier, a Brazilian ju-jitsu expert named Scatter (Michael Kenneth Williams), refuses to play along, so Youngblood and his best pal Eddie (the brilliant Jason Mitchell, utterly wasted) head to Mexico to make direct contact with the cartel.

1 Australian police chief says ‘dangerous’ Irish man lied on visa application
2 Further 334 confirmed cases of Covid-19 reported, 174 of them in Dublin
3 Further restrictions expected for Dublin if Covid-19 infection rate does not stablilise
4 Ellen DeGeneres apology: Why do her words sound hollow?
5 Dublin farmer discovers overnight rave on his land
6 Three Covid-19 mistakes Ireland urgently needs to learn from
7 Leaving Cert students to get access to ‘highly sensitive’ class rankings from Monday
8 Should I switch bank now with Ulster Bank at risk of closing?
9 Air travel never going ‘back to way it was’
10 Homeless man died after being stabbed 183 times in Dublin park, trial hears
11 Why are men still explaining things to women?
12 Trump in the rough over playing golf and US Covid-19 fatalities
13 Q&A: How do new Covid-19 restrictions in the UK differ from Ireland?
14 Boris Johnson: The UK’s new Covid restrictions to last ‘perhaps six months’
15 Ten new advisers to junior ministers to be appointed despite previous Government decision
16 The secret to an airy and light scone with a pillowy interior
17 Mary Berry’s Ireland visit: here’s what she did and what she cooked
18 Will brother’s widow get half of our parents’ estate when they die?
19 Taoiseach defends pandemic payment cut as new advisers approved
20 Covid-19: US death toll hits ‘unfathomable’ 200,000
21 Brian Boyd: Rave on, Van Morrison, rave on thy holy fool
22 Fintan O'Toole: Ireland's young and working classes are in the Covid-19 firing line
23 Scrapping court oath would ‘materially increase’ false evidence, judge says
24 Eileen Flynn: ‘As a Traveller woman, I was undermined in the maternity hospital’
25 Covid-19: Ireland has one of western Europe’s highest infection rates in older people
26 Household wealth jumps by 74% since last recession – report
27 Judge gives hermit nun more time to find new accommodation
28 Teenager (14) one of five children placed in spit-hoods by gardaí
29 Life in Level 3: What is happening under the new restrictions in Dublin?
30 Róisín Ingle: We’re in a different pandemic place now. Nobody’s quoting Seamus Heaney any more
31 ‘How happy he was’: Candid David Bowie photographs by his childhood friend Geoff
32 Man killed in Dublin after being hit by car driving wrong way is named
33 Screen time linked to rising mental health issues in children – study
34 Suarez’ Italian language exam rigged according to prosecutors
35 How to mange your children’s screen time
36 Paschal Donohoe on how nations play the soft power game to win
37 Awarding of 2023 Rugby World Cup to France part of Laporte investigation
38 Life from the age 40 until your first hip-replacement is actually rubbish
39 The Offload: Saracens prove Pro14 is not fit for purpose
40 EU member states believe UK does not want a deal, says Coveney
Real news has value SUBSCRIBE