This fascinating feature debut from Simon Blake spends much of its duration working out what it wants to be: domestic drama, London noir, social-realist tragedy - but never quite finds an answer 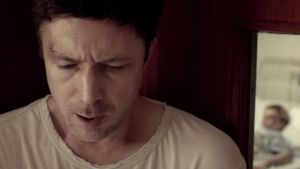 This fascinating feature debut from Simon Blake spends much of its duration working out what it wants to be: domestic drama, London noir, social-realist tragedy. The film never quite finds an answer, but the willingness to try on so many metaphorical hats is refreshing in itself.

An intense, angular Aidan Gillen plays Carver, a photographer who, living in an elegantly distressed part of Kings Cross, is coping indifferently with the recent death of his son. His estranged wife visits. He makes friends with a young boy who also has an interest in photography. Thugs gather about his house and push unpleasant material through the letterbox. Every two steps towards emotional recovery are followed by at least one backwards.

The film is very good on the pressures of modern city life and the way grief colours even the most mundane corners of existence. Always good when at his most intense, Gillen does a fine job of representing a psyche that is yellowing toward jaundice.

If the picture does have a problem it is to do with its need to keep cool. Carver’s flat looks to have been decaying untouched since 1992: he has an old-school analogue answering machine and many ancient hardbacks. When we are not listening to jazz, we are pondering the hero’s achingly hip collection of post-punk records: Station to Station, Metal Box, Trans-Europe Express. (Let’s just pretend that there’s no possibility he’s named for Raymond Carver and move on.)

Fair enough. Like a first-time novelist, the debut director has the right to work in a few personal interests and obsessions.

In Still, Blake demonstrates a sharp eye for constructing attractive off-centre images and a gift for teasing out strong performances. Hard-ass English directors such as Mike Hodges would surely sense their influence in is work. Very promising stuff.