Stars turn out for Irish premiere of ‘Brooklyn’ 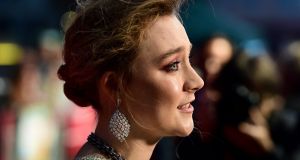 Irish actor Saoirse Ronan who stars in the ‘Brooklyn’ arriving at the Savoy Cinema for the Irish premiere. Photograph: Ian West/PA Wire

Actor Saoirse Ronan was joined by her co-stars of Brooklyn and U2 front-man Bono on the red carpet at the Savoy cinema in Dublin for the Irish premiere of the movie.

The film recounts the story of a girl struggling to adapt to her new life in New York after moving thousands of miles from home and Ronan (21) said it was the perfect role for her.

“Personally it was the perfect thing for me to be involved in and it became more and more fitting as time went on, because from the time I signed up to the time I shot it, I moved away and was experiencing homesickness myself. So emotionally I was in that place already.”

Directed by John Crowley, Brooklyn met with critical acclaim following showings at the Sundance, New York and Vancouver film festivals earlier this year, and Ronan has been tipped for an Oscar nomination for her performance.

Novelist Colm Tóibín penned the original book upon which the movie is based, and he commended Ronan for her depiction of main character, Eilis Lacey. “It’s really great that she has her first Irish role, that it’s a big role, and that she’s not anybody’s wife, girlfriend, daughter – it’s her film. She can do with one turn of her face what it takes me 30 pages to do,” he said.

Mr Crowley said: “It’s a great honour to get the chance of making a film that’s a profoundly important story for this country. I’ve never seen it as just being a film about the 1950s . . . This story could have happened at any point in the last 150 years of Irish history.”