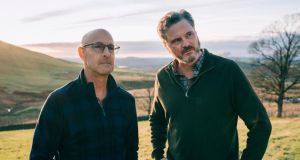 The actors Stanley Tucci, Colin Firth and Nina Hoss and the director Steve McQueen are among the filmmakers lined up to appear at next month’s Virgin Media Dublin International Film Festival.

Last year’s festival came to a close mere days before Covid-19 propelled Ireland into the first lockdown. As sighs of relief were breathed, few could have anticipated that, a little less than 12 months later, the organisers would be forced to take the 2021 event succeeding festival online. Films will, this year, be available to attendees courtesy of the screening portal Eventive.

Tucci and Firth, returning friends of the festival, will be on screens for a discussion after the opening showing of Harry Macqueen’s Supernova. Already highly acclaimed, the film concerns an older couple coping with the trials of dementia.

Firth will be presented with the Volta Award, an honour, named after the Dublin cinema run by James Joyce, for distinguished contribution to the world of film. Such talents as Daniel Day-Lewis, Ralph Fiennes, Angela Lansbury, Julie Andrews and Al Pacino have picked up Voltas in earlier editions.

Other highlights of the festival, which runs from March 3rd until March 14th, include Lee Isaac Chung’s Minari, an Oscar-tipped drama about the travails of a Korean-American family in the Ozarks; Gregory Monro’s Kubrick by Kubrick, a study of that great director; Philippe Falardeau’s My New York Year, starring Sigourney Weaver in an adaptation of Joanna Rakoff’s memoir My Salinger Year, and the Irish premiere of Francis Lee’s Ammonite, in which Saoirse Ronan and Kate Winslet fall into each other’s arms while collecting fossils in 19th-century Dorset.

“We have reached out to old and new friends to join us for our online presentation, and the guest list is growing every day,” Gráinne Humphreys, the festival director, said at the launch today of the 2021 line-up. “I hope that this year’s programme will excite and delight both our regular attendees and attract new audiences to this celebration of the best of independent cinema. It has been a long climb to get here – but we believe the view is worth it.”

As ever, Dublin International Film Festival will highlight the best of upcoming Irish cinema. The event closes with Rachel Carey’s black comedy Deadly Cuts. Angeline Ball, Victoria Smurfit and Pauline McLynn star in a film that finds hairdressers becoming accidental vigilantes. (It’s all there in the title.)

Other domestic highlights take in Son, a promising horror from the versatile festival regular Ivan Kavanagh; Piotr Domalewski’s I Never Cry, a meditation on the Polish-Irish experience; and Chris Baugh’s The Boys from County Hell, a comedy about a huddle of young people following the traces of Bram Stoker.

No virtual attendee will want to miss the latest from Tadhg O’Sullivan. That hugely original filmmaker, director of the experimental documentary The Great Wall, presents To the Moon, a feature-length wander through the night sky that played to acclaim at the prestigious Telluride festival. The new Future Shock strand will give us a chance to see David Burke’s much-talked-about documentary The Father of the Cyborgs.

Special events will include Mark O’Halloran, among our most gifted film writers, in conversation with McQueen, the British director currently enjoying rapturous acclaim for Small Axe, a series of films for television. Winner of the Turner Prize for his gallery-based art and of an Oscar for 12 Years a Slave, McQueen will look back on a decade and a half of ground-breaking cinema.

Walter Fasano will talk about Pino, his documentary about the artist Pino Pascali, and Nina Hoss, one of her generation’s greatest actors, will take part in a Q&A after the screening of Stéphanie Chuat and Véronique Reymond’s much-acclaimed feature My Little Sister.

The festival will present seven programmes of Irish and international shorts, including the Screen Ireland Short Film Selection, a Young Audiences selection and the Warner Media LGBTQ selection. Industry initiatives include the Aer Lingus Discovery Award for emerging talent and the First Frame Film Student Initiative, sponsored by Warner Media.

A highlight of the festival for many years, the Dublin Film Critics Circle Awards will deliberate upon the best films and performances of the 10 days. This year the reviewers will be passing on their accolades in a remote ceremony.

TV guide: 23 of the best shows to watch this week, starting tonight