Spark: A Space Tail review - a disaster of cosmic proportions

The animation is ugly and basic, the plot is lazy, and the voice talents of Jessica Biel, Patrick Stewart and others are completely wasted 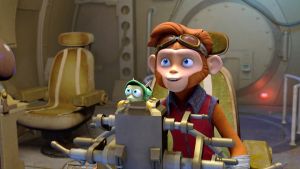 Crappy internationally co-produced animation, ahoy. Thirteen years ago – just long enough to produce a bratty teen protagonist called Spark – the evil General Zhong overthrew his presumably nicer brother to seize the throne of the planet Bana, using a doo-dah thingy known as a “slick”. These space-time continuum busting slicks are defecated - yep - out by an intergalactic marauder known as a space kraken. So far, so Scientology, right? The B52s are coming! If only.

Some more backstory (backstory that seems to exist solely to justify unsophisticated geometrical pixels passing across the screen) follows before we catch up with Spark (Henry Danger’s Jace Norman) who now lives on a garbage dump, with a large tech-whiz warthog, and a Lara Croftian fox (Jessica Biel) called Vix, whose construction is so basic and triangular, I took it as a cue to recite Pythagorean theorems. Oh, and because she’s a fox, she’s a fox, get it? Spark, meanwhile, is a monkey. Because A Space Tail. Get it? You better: that’s the best joke in the movie.

Vix plays sensei to Spark, who responds by growing impatient and storming off on his hover-cycle.

She’s right to be concerned with his ass-kicking education. Because it turns out there’s a kraken finder and some other stuff and a Scottish army captain voiced by Patrick Stewart (why?). Not to mention the warring insectizoid things and a long-lost mum played by two-time Oscar winner Hilary Swank. (Again, why?)

The animation is exceptionally ugly and basic. The lighting is dark enough to recall such early CG missteps as Chicken Little. The dimensions and planes are Nyan Cat run over by a car. Many things look like other better things: one spaceship is a bit Laputa at a squint, those monkeys are the winged messengers from The Wizard of Oz, the intergalactic battles look like Pong, and the plot – once it stops introducing random things – is Star Wars: A New Hope.

And it still fails to congeal into a movie shape.

‘I knew she was loved’: Nick Grimshaw on Caroline Flack and mental health
Real news has value SUBSCRIBE