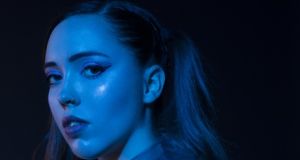 Sophie Allison: “I don’t find it tough writing about something like [cancer].”

Songwriting is a lot like bleeding, says Sophie Allison, AKA up-and-coming indie pop superstar Soccer Mommy. “It isn’t pretty in every way,” she laughs. “But it naturally comes out of me.”

A case in point is a track called Stain on her new album. It’s about a traumatic betrayal she suffered as a teenager. “You pulled me close,” she croons. “And went through me like a ghost.”

Her voice cracks as she delivers the line on the record. Allison isn’t sure she wants to perform it live. She certainly isn’t keen on unpacking its meaning for a journalist. Some secrets are meant to stay that way.

“I don’t want to give up what it’s about,” she says. “It’s basically about feeling you’ve lost something, a piece of yourself. Another person took it from you. It’s about being frustrated and angry with that.”

Allison, who is 22 and confident in that middle class American way falls silent. She has brought up Stain – and then quickly put it back in its box – as an example of something from her life that verges on too painful to sing about.

That is in contrast, she says, with the several songs on her new LP, Color Theory, documenting her mother’s decade-long fight with cancer. Here, the lyrics are no less fraught. But she’s comfortable sharing them and publicly acknowledging their meaning.

“I spent so many years having that be part of my life,” she says of her mother’s illness. “I had gotten kind of numb to it. It’s been years since the worst part. I was much younger.”

In a way it would have been weirder not to write about, she says. It’s been woven into the fabric of her existence for as long as she can recall. “Holding that kind of thing back – that’s the most damaging thing you can do.”

Her mother is a haunting presence on Color Theory’s centrepiece, Yellow Is The Colour of Her Eyes. It’s bleak and roiling, a track to send you staggering away devastated.

The Allison that emerges on Color Theory is unrecognisable from the sweet and slightly naive figure she cut on her 2018 debut, Clean. That record was hailed as a return to the jangling first principles of 1990s indie rock, to which Allison added her childhood infatuation with Avril Lavigne and Taylor Swift.

Clean made her a star in certain circles (she sold out the Grand Social in Dublin that year). It even spawned a quasi-hit in Cool, an effervescent rocker that suggested Juliana Hatfield trapped in wardrobe with Throwing Muses.

But she’s moved on. Allison has grown up, entered fully into the adult world with all its obligations and annoyances – the hopes and fears that keep you awake at 3am.

“I don’t find it tough writing about something like [cancer]. Sometimes it’s hard to find the right words. That’s the hardest part of anything. It can feel cathartic to talk about something and live past it a little. I can’t live past it fully – it’s still part of my life.”

Color Theory is darker and stormier than Clean. It is also poised to make Allison a star. Before it was even released she had received gushing write-ups in the New York Times (“Soccer Mommy Is Pushing Through The Indie Rock Growing Pains”) and Rolling Stone (“a leap forward”). She is suddenly an artist in the spotlight.

“The amount of press and responses from the press is totally different from before,” she says. “And from people – normal people. You have more people checking it out. More people hating it too. It is definitely what I dreamed of. There are parts that I hate of course. It’s like any job. It’s never the music that puts you off. The parts that I love are releasing music and having people respond to it.”

With the American presidential election on the horizon she is in a political frame of mind. Downtown Nashville, where she lives, voted Hillary in 2016. Not that it made any difference. The rest of Tennessee was a sea of Trump supporters.

“My vote doesn’t really matter,” she says. “It’s a big problem. Tennessee is going to vote Red in the election. It’s sad. An hour outside Nashville, it’s all rural. All the people are Trump supporters. They’ve been raised with racism and sexism and all of this shit.”

Some of them are probably decent people just getting on with life. “Yeah some of them. But it’s not excusable to be racist. America is in a constant battle. Even when we do move forward there’s a little bit of a backlash. Politicians can be so centrist, trying to please everyone.

“They won’t get anything done if they are elected to office. There’s such a battle between all of the branches of government and the people leading each branch. Obviously the intention is to prevent any one party dominating. Except that’s what we essentially have now with the Republicans. It’s pretty f**ked up.”

Who is she supporting in the race for the Democratic Party nomination? “Bernie…definitely Bernie,” says Allison, referring to left wing septuagenarian Bernie Sanders. “He’s the person who cares about poor people the most. That’s why he’s getting more votes right now.”

Allison has strong thoughts regarding the dark side of the record industry. She touched on this on a recent single. Lucy is short of “Lucifer” and is about the destructive habits you can slip into and also the compromises expected of you when you are co-opted into the music business.

“Most of the streaming companies are sh**ty,” she says. “What are you going to do? Just not be a musician? It’s different if you are Taylor Swift. If you’re a small artist you can’t reasonably not have your music on the internet. Everybody listens to music through streaming. I don’t know one person who doesn’t.

“There’s a lot of stuff like that. Promoters… you know, I don’t want to name names. Obviously you can’t s**t on them too much. Some of the largest promoters in America...some of them are supported by bad companies.”

Allison’s mother teaches first grade, her father is a neuroscientist lecturing at Vanderbilt University in Tennessee. They met in Huston and eventually settled in Nashville, where Allison grew up (she was born in Switzerland in May 1997).

She excelled at school (and yes, played soccer). But she was also obsessed with music. The earliest song she remembers learning all the way through was Beautiful Soul by proto-Bieber hearthrob Jesse Mccartney. Aged 12 she started taking jazz lessons. In her teens she discovered indie bands such as Deerhunter and Sleater-Kinney – instinctive outsiders blending chaos and aggression with a playful pop quality.

High school was followed by NYU in New York, one of the hardest colleges to get into in America outside the Ivy League. However, in 2017, after two years majoring in music business, she dropped out, went home, and started playing gigs whenever and wherever she could. Allison doesn’t want to sugarcoat this phase of her career. It was a struggle.

“My parents were great about it. I couldn’t have done it without them. I didn’t have a car. They helped me get one. Without them I would have had to say ‘no’ to a lot of the stuff I had to do early on that didn’t make money. I would go out on tour and lose a bunch of money. And I’d come home and work in Postmates [America’s answer to Deliveroo] a bunch, so that I knew I could pay for gas on the next tour. It’s tough.”

She is aware she is in a position of privilege. Had her parents not been able to support her with accommodation and a car, none of this might be happening.

“That’s a big problem with the music industry. It makes it a barrier for people,” she says. “If you’re doing really well it doesn’t take that long to make enough money to be able to become self-sustaining. You’ll still be broke, but you can do it. Not everyone can afford to be broke. Not everyone has that fallback.”

Color Theory is out now.

Coffee & Kareem: If you think swearing is big and clever, this is for you