Review: This tale of a 15-year-old living by his wits features wildly charismatic performances 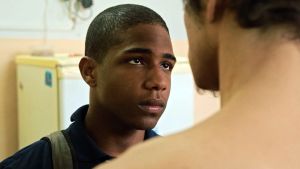 After his mother’s sudden death, Sócrates (Christian Malheiros), a 15-year-old living by his wits on São Paulo’s coast, has little or no time for grief. With the rent already overdue, he fills in for his mother at her cleaning job, suggesting that she’s taking yet another sick day.

Displaying a seemingly infinite capacity for rejection, the youngster bounces from shop to stand desperately looking for work. His age precludes him from all but the murkiest of sectors, including a temporary gig as a junkyard worker alongside the aggressive similarly-aged Maicon (Tales Ordakji). The latter unexpectedly calls Sócrates with a job offer that, in fact, is just a pick-up line. It works, and a blazingly passionate affair ensues.

The title character’s struggles continue to snowball as he roams the streets looking for food and lodgings. His fear of encountering his father (Jayme Rodrigues) is established early for reasons that become horrifyingly apparent.     Sócrates opens with what reads like a caveat: “This film was produced by a crew of 16-20-year-olds of the Querô Institute, a Unicef-supported project that provides social inclusion through film-making to teenagers of low-income households in the Baixada Santista region of São Paulo. ”

One might never have guessed as much watching this handsomely mounted, beautifully performed drama. Alexandre Moratto’s debut feature shares DNA with Cathy Come Home and other downward spirals found within Ken Loach’s compelling back catalogue. Like in those films, the depressing circumstances depicted are counterpointed by a rare spiritedness.