Rosario Dawson broke into acting at the age of 15 in controversial film ‘Kids’, She can now add political and charitable activism to her CV 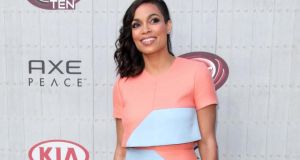 Dawson’s been in the public eye since she was 15 when she starred in the controversial Harmony Korine vehicle about drugs and HIV, Kids.

Rosario Dawson flings herself onto the low red sofa, throws her legs over the back of it and lets out a little tired moan. She’s jetlagged and she’s hungry, she says, but she pulls herself together and sits up neatly, ready to talk.

And Dawson can talk. I try to open with some gentle remarks about her recent birthday and before I know it we’re knee deep in Aboriginal philosophy, and her old friend Prince’s attitude to birthdays (“he always said he would celebrate when he died which he did, and the whole world celebrated him”). But she’s friendly too – touching your arm constantly to make sure you really hear her.

Dawson’s been in the public eye since she was 15 when she starred in the controversial Harmony Korine vehicle about drugs and HIV, Kids. “My dad was the one who told me to go downstairs and get discovered because they were shooting a commercial on my block. He was like, ‘You’re always dancing, I’m sure they’re gonna need dancers.’”

She got the commercial and then went on to do Kids. But from the start, she used the opportunity to speak out about HIV in interviews. For her, it’s always been “more than just about it being storytelling”.

Activism is a natural fit for Dawson. Her family moved into an East Village squat when she was six years’ old and her parents learned trades to make the place inhabitable. “We suddenly had water heat and electricity . . . that tenacity is just something that’s always influenced me and inspired me to understand. I grew up with poor people helping poor people . . .”

She’s founded Voto Latino and works with Amnesty International and Oxfam. She sees people “do great things that are local and important and life saving ... so to be in this position where I get a microphone thrust in my face it makes sense to me more to talk about that then just about my favourite hair colour ... I mean I pretended, I memorised some lines and I said it emotionally and I’m really glad people like that but like this person literally just saved this person’s life, you should talk to them,” she laughs.

Her charitable work has given her “a lot of balance in my life that I see sometimes people that I work with not have and they’re searching for that other thing to kind of put their energy into that isn’t so self-aggrandising.”

She understands why people might be sceptical about celebrity ambassadors but sees charities recruiting them because “the philanthropic system is so broken”. But it can damage a charity’s reputation if it’s not authentic. “I’m never about going ‘because you’re a celebrity, you should have a cause’ – it should be coming from a real natural place. It’s more hurtful for them to go on the red carpet and say something really inaccurate than if you just had activists there.”

Dawson is also an active supporter of Bernie Sanders presidential campaign. “People are like ‘you’re being political’ and I’m like, well I’ve always been political but I didn’t realise I needed to take it this level.”

She recently faced criticism from the Clinton campaign when she ‘invoked’ Monica Lewinsky at a Sanders rally where she said, “We are literally under attack for not just supporting the other candidate. Now, I’m with Monica Lewinsky with this. Bullying is bad.”

Dawson maintains mentioning Lewinsky was not a personal attack. She was referring to her belief that the Clinton campaign is actively suppressing dissenting voices. She sees Lewinsky primarily as an antibullying activist “Bullying is a huge big issue and especially putting myself out there for Bernie Sanders and not just immediately endorsing a female candidate ... Monica’s TED talk and her stance on bullying has actually been a source of comfort to me.”

After immersing herself in the charitable and the political, how does Dawson reconcile herself with the superficial aspects of Hollywood? She has previously spoken about going into auditions in baggy sweatshirts to keep the focus on the acting.

“It’s still shocking how often I walk into things and they’re like, can you wear . . .? I’m like, I’ve been naked in films. I don’t look that much different than I did then. Use your imagination. There’s a severe lack of imagination in this industry which is always profoundly disturbing.” But she’s pragmatic about Hollywood being primarily a “money machine ... It’s a constant reminder of the business aspect of it as much as you want it to be this perfect artistic endeavour.”

And she has no intention of leaving acting behind. It allows her to refocus her energy. “Luke Cage just finished but I’m about to go back with [Marvel]. I chose this movie to do and then I started doing all this Bernie Sanders stuff and it was just like, I’ve got one too many things on my plate.

“I’ve been wishing I could do even more for Bernie but it was really good to go to Atlanta and work on this movie, Crystal. It’s William H Macy directing and Kathy Bates and all these amazing people.”

It gave her some time to breathe, to say “actually I wear a lot of hats and I’m gonna switch hats right now and put my energy into this film and be in this other location. It was just like, I think I needed that.”

Rosario Dawson is an ambassador for the Budweiser Dream Big competition, the winner of which will have their American dream made a reality. buddreambig.ie

Brigitte Nielsen on giving birth at 54: ‘I was trying until there were no embryos left’
6