Review: The Fault in Our Stars

The Fault in Our Stars - trailer 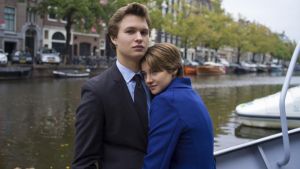 Film Title: The Fault in Our Stars

Hazel Grace Lancaster (Shailene Woodley) is a 17-year-old terminal cancer patient. She survives as a freak statistic in an experimental drug trial. But not for too much longer.

At the behest of her brave-faced mom (Laura Dern), Hazel reluctantly drags her wheelie oxygen tank along to a church-sponsored support group for similarly afflicted youngsters. Here she bonds with Augustus Waters (Ansel Elgort), a wise-cracking 18-year-old whose cancer is currently in remission following the amputation of a leg. The star-crossed teens develop a mutual obsession with each other and with Hazel’s favourite book, An Imperial Affliction. They dream of visiting the novel’s reclusive author, Peter van Houten, in Amsterdam.

Will they ever make it across the Atlantic? And will the writer have answers to Hazel’s many questions?

That’s a little unfair: The Fault in Our Stars does, at least, use technical terms such as metastasised and osteosarcoma. But, throughout, Hazel tells us rather than shows us when she’s out of breath. Her perfect eyelash extensions remain immune to all mortal afflictions. There is, additionally a lot of schtick (Augustus keeps but never smokes cigarettes, so they have no power to harm him), including an awfully familiar narrative.

This kind of disingenuousness leaves the film surprisingly low on blub factor. Set against the weepie pantheon, it’s more like Twilight in the ICU than such heartfelt classics of the subgenre, such as Dark Victory, or contemporary rivals Now Is Good and 50/50.

That is perhaps as it should be: both Hazel and Augustus are youngsters protected by layers of snark, experience and gallows humour. The low-Kleenex count is refreshing in the circumstances.

They are, also, disarmingly ordinary: smart but not intellectual, witty but unlikely to land a job in stand-up. The two leads are suitably winsome, and are ably supported by show-stealers Nat Wolff (as Augustus’s BF) and Willem Dafoe (as the compellingly ghastly Peter van Houten).

It’s a shame that this rather credible screen teen heroine has been entrusted to someone who thinks feminism means taking power away from men. But it’s delightful to see a summer movie with humanity instead of CGI super-robots. Go people.