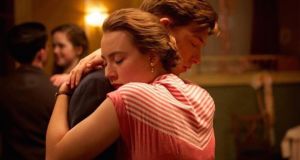 Saoirse Ronan stars as the young protagonist in John Crowley’s “Brooklyn”, an adaptation of Colm Tóibín’s popular novel about a woman torn between rural Ireland and a New York borough.

Saoirse Ronan stars as the young protagonist. Domhnall Gleeson is the man she leaves behind. The Hollywood Reporter was particularly effusive. “Colm Toibin’s superior novel ... has been turned into a beautiful and moving film,” Todd McCarthy wrote in that trade paper.

“Classily and classically crafted in the best sense by director John Crowley and screenwriter Nick Hornby, this superbly acted romantic drama is set in the early 1950s and provides the feeling of being lifted into a different world altogether.”

Kyle Smith, critic for the New York Post, felt the film did his home city proud. “Brooklyn is a conventional tearjerker,” he wrote. “But despite its familiar structure it’s a thing of beauty, a delicate, tender period piece about nice people trying to do their best.”

Partially funded by the Irish Film Board, Brooklyn follows plucky Eilis Lacey as she moves from Ireland to Brookyn in the 1950s.

After falling for an Italian-American man, she is drawn back home and must decide between her old life and the promise of America.

“I get very emotional when I talk about it,” she said.

“I hope I’m not going to start crying. I never had a film affect me like that. It was very much a passion project for all the people involved.”

Mr Turan described Brooklyn as “without a doubt my favourite Sundance drama”.

Selected for the Premieres section, Brooklyn – like John Michael McDonagh’s Calvary last year – will not compete for any prizes at the event.

But Gerard Barrett’s Glassland, winner of the audience award at last year’s Galway Film Fleadh, is among the riders in the World Cinema Dramatic competition.

“The tears in Glassland catch you unawares,” the Guardian commented. “This is not your run-of-the-mill weepy, nor your archly-crafted Oscar bait.”

Long associated with guiding influence Robert Redford, the Sundance Film Festival has, for three decades, been the most influential event for independent and low-budget cinema.

The producers of Brooklyn will, with some justification, already be pondering the 2016 Academy Awards.