Peter Fonda, though a smaller star than other family members, helped reinvent Hollywood 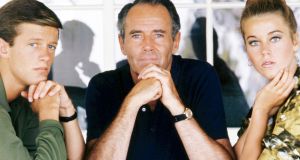 The rebels of the 1960s are beginning to die of something like old age. Peter Fonda – who has died aged 79 – was nearly 30 when Easy Rider emerged in the summer of 1969, but, despite good work in succeeding decades, he will always be associated with the moment when American youth shrugged off post-war torpor and lunged briefly towards hedonism.

His filmography does not compare with that of his father, Henry Fonda, or his sister Jane. He, nevertheless, remains an avatar of a pivotal era.

Like Jane, his status as a generational crusader was accentuated by association with a great star – one of the greatest – from Hollywood’s golden years.

Peter was born to Henry Fonda and Frances Ford Seymour, a socialite of Canadian birth, on February 23rd, 1940 in New York City. Following the death of his mother by suicide in 1950, he was sent to live with an aunt and uncle in Nebraska.

Both Jane and Peter admitted that relations with their father were strained. The siblings were a tad older than most 1960s rebels, but, for a fascinated America, they helped navigate the greatest generational divide in the nation’s short history.

Henry Fonda did not approve. Even before Jane and Peter embraced the counterculture, he had established a concrete divide between parent and children.

Peter later compared his dad to the savage martinet he played in John Ford’s Fort Apache. “When people ask me what it was like growing up as Henry Fonda’s son, I ask them if they have seen Fort Apache,” he said.

He acted a bit in Nebraska and, in 1963, made his big-screen debut opposite prim Sandra Dee in Tammy and the Doctor. A game performer with softer features than his father, he struggled through half-decent roles before – as the revolution really got going – getting sucked into the wing of Roger Corman’s indie empire that played to the counterculture.

In 1966, The Wild Angels, a biker-picture trading in off-the-peg nihilism, established him as an emblematic figure of the coming tumult. He followed that up with the still dizzying psychedelic fantasy that is The Trip. Written by Jack Nicholson, co-starring Dennis Hopper, the picture sent a TV commercial director on a nightmare journey through a drugged-up version of the Sunset Strip.

Mainstream culture could keep Wild Angels and The Trip at arm’s length. Both were only modestly sized hits and both felt like cynical exploitations from a studio that would surely move on to the next fad whenever it arrived (a canny alumnus of Stanford and Oxford, Corman was doing no further dropping out).

But Easy Rider was something different. It was made by true believers, it spoke to genuine concerns and – far, far more important to Hollywood – it was a massive success. The Trip did very well by accumulating $10 million. Easy Rider grabbed six times that amount.

The biker epic, starring Fonda as the laconic “Captain America”, helped accelerate an engagement with the counterculture that lasted until Star Wars righted the commercial barrel in 1977.

Whereas his sister brilliantly rode various zeitgeists from pre-Watergate paranoia in Klute to 1980s Me Culture with her exercise tapes, Peter Fonda became something of a peripheral character in the decades after Easy Rider’s unexpected success.

But there were under-appreciated classics in there. His directorial debut, The Hired Hand from 1971, a brilliant post-classical western co-starring Warren Oates, received a triumphant restoration 30 years later.

He is delightfully laconic in sub-exploitation flicks from the 1970s such as Dirty Mary, Crazy Larry and 92 in the Shade. It seemed, however, that directors didn’t know what to do with a low-key energy that suited dope-fugged 1960s pads better than the tubular-steel Reagan era.

Yet Peter Fonda remained a greatly liked personality. In the late 1990s, by then less famous than his talented daughter Bridget Fonda, he played a record producer for Steven Soderbergh in The Limey and a widowed beekeeper for Victor Nuñez in Ulee’s Gold. That film won him an Oscar nomination and good-spirited welcomes back from the world’s critics.

Newsweek described Fonda’s performance in Nuñez’s film as “the best he’s ever given”. Fonda looked, at one point, like the favourite for the Oscar, but, in a turn no screenwriter would attempt, ended up losing out to Jack Nicholson, his Easy Rider co-star, for that actor’s performance in As Good as it Gets.

There was always a sense that the collective movie-going public wanted more of Fonda. His relative absence added to the sense of elusive cool that gathered around a man who had helped invent post-Vietnam popular culture. Jane became all those many things.

Still thin, still good-mannered, still halting in his delivery, Peter aged into a more distinguished version of the character he took on – both in films and at famous parties with the Beatles – as the Aquarius era fanned out across a troubled nation.

The 1960s did that to a lot of people, but Fonda’s scant public visibility helped fuel the delusion that “Captain America” was still out there on some dangerous highway. A bit of rebel status was regained when, in 2018, he had to apologise for overheated Tweets – bring Barron Trump into the conversation – criticising the President’s policies on immigration.

Yet most of this weekend’s obituaries began and ended in the 1960s. Any chance of him kicking that association was scuppered in 1991 when a sample from The Wild Angels turned up on Primal Scream’s era-defining song Loaded.

“We wanna be free to do what we wanna do,” his character said. “And we wanna get loaded. And we wanna have a good time.”

He was, of course, only briefly that person. The indomitable Jane offered more appropriate closing words. “He was my sweet-hearted baby brother,” she said. “The talker of the family. I have had beautiful alone time with him these last days. He went out laughing.”

Protesters at awards ceremony clash with police over Polanski

The Colour Out of Space: Take that, you art-horror whippersnappers
7