Pedro Almodóvar: Writing for men is a ‘kind of torture’

The Spanish director on the making of his latest movie Julieta, his ‘unity with women’, and the lack of authenticity in modern cinema 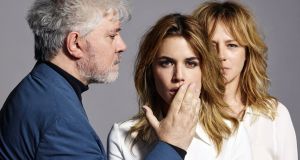 A group of us – me, Pedro Almodóvar, his assistant Lola and his translator – are huddled around a table in one of Soho’s swankiest hotels. We’re trying to work out the Spanish for “ghosting”, that modern phenomenon, wherein a friend or lover disappears without explanation. Mobile numbers, social media accounts and emails are blocked or changed accordingly.

As it happens, this 21st century dumping method isn’t a Castilian concept just yet, but it does pertain to Almodóvar’s new film, Julieta.

“It’s not about a romantic relationship,” says the film-maker from under his impressive brush of silver hair. “But it is about a mother and daughter, a relationship that is very passionate. There is a sense of betrayal. Even at the start, the mother feels that the daughter loves her father more.

Should the theoretical alien civilisations orbiting KIC 8462852 venture to our planet, they would likely recognise Julieta as an Almodóvar picture. The film’s “cherchez-la-femme” narrative plays out in Hitchcockian beats against red walls and weird phallic ceramics.

It’s a woman’s picture. Of course, it is. As if to stay on message, the film-maker compliments me on the firmness of my handshake when we meet. “I like a strong woman,” he smiles, with gleeful self-awareness.

“Can you imagine it?” he says. “Can you imagine that the studios had a genre called after women and made for women? Incredible films starring Bette Davis, Joan Crawford and Jane Wyman. It couldn’t happen now.”

There are some exceptions, he says. We still can depend on Meryl Streep to pop up in something that looks like a woman’s film. And the director is particularly intrigued by TV’s Homeland.

“All of the reality, all of the truth is being taken out of cinema,” he says. “So you have to turn to television to find someone like Claire Danes on Homeland. She’s bipolar. She’s not always reliable. Even with the dramatic things happening around her, she deals with issues that a 35-year-old woman might have to deal with.”

He describes writing for men as a “kind of torture”, but can’t explain why he prefers his onscreen surrogates – muses that include Carmen Maura, Elena Anaya, Penélope Cruz, Victoria Abril, Chus Lampreave, Marisa Paredes – to be women.

“I’ve always liked it that way,” he says. “I’m not sure why. I’ve always felt a unity with women.”

Why so serious? It was suggested by the source material, he says. In order to adapt the work of Alice Munro, “ . . . it had to be pure. It had to be naked. That is what this character is going through. There could be nothing to hide. And it is my 20th film. I have to change what I am doing. I will get bored. I do not want to repeat myself.”

The Canadian Nobel laureate Munro is not an obvious choice for Almodóvar, but then neither was Ruth Rendell, whose Live Flesh he adapted in 1997. When he’s reading, does he know right away when he wants to adapt?

“I always know what I want to adapt,” he laughs. “Everything. It’s a kind of craziness with me. I’m going to leave all my books to my assistant Lola. Because they all have notes for screenplays written on them all the way through. I can’t help it.”

Julieta was supposed to be Almodóvar’s first English-language film with Meryl Streep in the title role. Ultimately the landscape – culturally, physically, politically – of the director’s homeland proved too strong a lure.

No change there then. Almodóvar is not overtly political, he says, but his films “reflect where I am and what I’m feeling”.

Sure enough, the films Almodóvar made in the 1980s – artefacts of the punkish “la movida madrileña” (the Madrid scene) – are intrinsically bound to the death of Franco and new societal freedoms. Pepi, Luci, Bom and Other Girls Like Mom (1980) sees a teenage punk introduce herself to her future lover by urinating in her face. Labyrinth of Passion (1982) concerns a nymphomaniac pop star named Sexilia. Matador (1986) centres on the relationship between an ex-bullfighter and his lawyer, who both get off on murder. Tie Me Up! Tie Me Down! (1990) is an erotically charged tale of Stockholm syndrome.

“We have two general elections in six months,” says Almodóvar. “And we’re looking at a third. The disorientation within the film reflects that. People no longer trust politics, politicians or institutions. They no longer feel represented. Reality always finds a way into my films.”

Today, Almodóvar mostly speaks through his translator, although occasionally – should it matter enough – he’ll turn around and say something in perfect, if vaguely accented English: “Spain is a secular country; it’s the politicians who want you to believe it’s a Catholic one”, “I’m not a believer but every night I pray that Donald Trump doesn’t become president”, and, for Ireland, as a major UK trading partner: not getting a say in Brexit “ . . . was undemocratic.”

He despairs, too, over the political resurgence of such sinister right-wing elements as the Catholic People’s Party.

“I have no problem with faith,” says Almodóvar, who first took aim at the moral bankruptcy of Spain’s religious institutions as long ago as 1983’s Dark Habits. “My mother was a practising Catholic. Faith is a gift. I sometimes feel lonely because it is not a gift I can share. I do have a problem with the clergy. I do not like how they have twisted the ideas of Jesus. And they have no place in politics.”

CECILIA ROTH The Argentinian actor is another favourite collaborator. She features in six Almodóvar films, stretching back to his debut feature Pepi, Luci, Bom and Other Girls Like Mom. Most recently, they worked together on I’m So Excited (2013).

Julieta is in cinemas now